I Got A Little Umbrella! 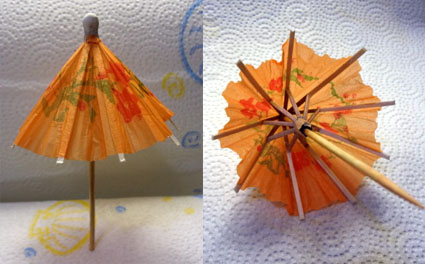 I got one of these little umbrellas yesterday when I bought a sugary, fruity drink (cherry shaved ice). Of course I love it. I don't know anyone who doesn't love them. If you had a political party whose symbol was the little umbrella on drinks, they'd get 100% of the vote.

The way they served the shaved ice at this place was different from anything I've seen before. They had a styrofoam glass, that's common enough. But then, up near the lip of the cup, the umbrella, with the toothpick handle, was stabbed through the styrofoam.

Then they had the most worthless little spoon/straw that came with it. Not to put too big a damper here on our happy proceedings, the straw wasn't big enough -- its scoop basin -- to really be of much help in the eating of the ice. I was pretty much reduced to jiggling the cup and from time to time extracting chunks of the ice into my mouth with my mouth. Of course you're going to have a lot of falling pieces doing it that way.

Along the way, I put the worthless straw in my pocket and only periodically brought it out to try to break up the harder pieces and make the ice more of a slush, particularly as I got about halfway done. That's when you need a utensil like that, then it's not any big deal to put it back in your pocket, jiggle it, and get the meat of the goodie out of the drink proper.

As for the umbrella, I kept it on the cup for quite a while, since it gave me quite a bit of panache as I roamed the festival grounds. I thought I noticed more than a few potential admirers giving my cup the eye. With it then being only a hop, skip, and jump up my arm, past my shoulder, to my reddened lips. I could pucker up and you'd be smitten.

Then, however, to free up the cup for more persistent jiggling as the drink wore on, I removed the umbrella and tucked it carefully in my shirt pocket, along with my iPod and phone. I was a little nervous because there was some stickiness on the toothpick from the drink. This showed itself later when I took out my iPod (the iPod Touch) and saw a cherry smear on its glass surface. But no big deal, I just breathed some hot breath on it and wiped it on my shirttail. I checked the toothpick and most of its stickiness was dried up, thanks to the drainage just mentioned plus whatever absorbency my shirt was able to provide.

So I've got the little umbrella! And it's really quite sweet, I love it. I was just admiring the workmanship and craft that has to go into one of these things. Because it has actual moving parts! It seems like it'd take some effort to mass produce them, at least in the initial design of the means of production. Look at all the parts! The printed umbrella surface, the circular thing that has the struts, then bends and forms the piece that surrounds the toothpick, the crown that holds it all together from the top, and a lengthier toothpick down the middle. It's a bunch of stuff!

My only complaint is they didn't put a clasp in there somewhere to keep it open. It tends to close itself. And to get it to stay open I might need to mess around with some fast-drying glue and a paperclip, which of course will mean I can't close it back up. But ... no matter ... getting it permanently open will make a cute decoration on one of my curtains, while providing me an excellent souvenir of one great shaved ice!

In addition to a clasp on the umbrella, my only other desire, to say it again, would have been a better spoon, perhaps a plastic spoon in addition to a nice straw.
Posted by dbkundalini at 7:15 AM