As Worthless As Boar Boobies 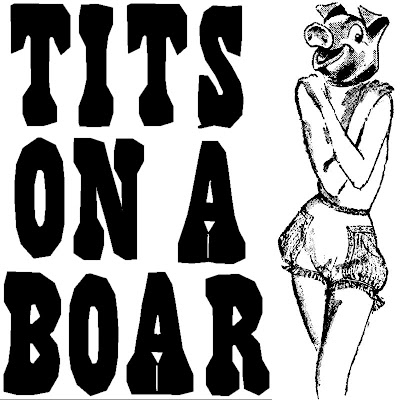 "You're as worthless as tits on a boar!" How many times have most of us heard that in our lives? It's one of those deals where if I had a nickel for every time, even taking into account inflation and dividing by two, I could've retired at 40. But instead of saving my money and letting it accrue, I figured, "What? A nickel, that's nothing!" and spent it. Or would have had I gotten them. As it turned out, even the idea of retiring early -- it was a lie -- was worthless as tits on a boar. Can a guy even retire when he's on disability -- game toe -- I'll be dragging this damn toe around forever, like the palsy, worthless as tits on a boar.

Probably even writing about tits on a boar is worthless as tits on a boar. What good's it going to do me? I don't get a big kick out of reading my own stuff. It's like Frank Sinatra, who wouldn't listen to his own records. But I've gotten this far, it's tough to stop now. I usually think that way about investments of time. It's been five minutes more or less, and even if it is indeed worthless as tits on a boar, I have my standards. Waste not, want not. You can't get your time back. So you have two choices, stop now and regret having started, or keep going and try to redeem it. My way is, if the spirit's moving -- anytime now! -- I keep going...

I actually get weird glimpses of ultimate reality, those glimpses that hit you all of a sudden and only last one second, based on this very thing. From starting things, then not being able to stop. Like the Big Bang, it's hard to collapse once it's erupted. As a personal example, which might turn out to be worthless as tits on a boar, too, let me offer this: You've got a stack of things to sort, let's say 25 things, like cards. You get them half way sorted, then you think, "I'm going to do it a different way, like descending instead of ascending order." For me, that can be a real freak out moment, albeit with some spiritual touches.

So where's that leave us? Probably at women. And here's where I am an authority. I have looked at most women, and ... I'll leave it to your imagination what they have. It's not boar tits, and they're not boring. In fact the more hidden they are, it seems, the more fascinating they are. A point worth making? Or worthless as tits on a boar?

Just one more point on boars. I truly have seen any number of boars. I've been to the State Fair, I know the facts of life. You go there and they have boars lounging around their pens, always with their bottom ends hanging out, since there's no where else to put them. Have you ever seen the privates on a boar? Holy mackerel! Skip to the next paragraph while I fan myself!

I'm thinking, just for the heck of it, that I'm gonna make various allusions to the balls of a boar from the album titles of the great Welsh singer Tom Jones. OK? First, they remind me of "The Lead and How to Swing It." That's a Tom Jones CD I used to have. Boar balls are strange to me, but to them "It's Not Unusual." What they're like to carry around is something I'm glad I don't have to know. But for them, it's probably a lot of "Funny Familiar Forgotten Feelings." Forgotten because they lay down a lot, and only get up when flies bite them too much. Compared to a boar, I think of myself as "I Who Have Nothing."

What if you fell in a boar's pen and he thought you were a sow? He might say, "Say You'll Stay Until Tomorrow." If you did, you'd say, "What a Night." And not necessarily in a good way. You certainly wouldn't wait around for him to "Reload." Probably for the most part, when they asked, "Do You Take This Man" you'd take just one quick look and reply, "Rescue Me." But, alas, once you were gone, the boar might forever "Carry a Torch."

OK, everyone, please do me a favor: If anyone else has already written about boar tits and boar balls, particularly in reference to Tom Jones albums, let me know. I'd hate to be accused to copying someone else's idea. But one thing I don't want to hear is if you think this blog is worthless as tits on a boar. I'm sensitive. As the Tom Jones album puts it, what I need is "Tender Loving Care."
Posted by dbkundalini at 5:31 PM