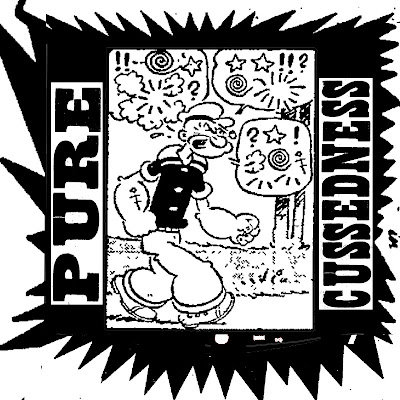 Ha ha, were ya expecting a few F bombs? I got em on board, and I probably won't but I could strafe the landscape with em. Most of my followers are women. But it's hard to picture a life of pure cussedness without em.

Whether cussing and cussedness are actually related, I don't know. Why don't you Google it, get the usual million hits, and shove it-- I mean, file it -- where the sun don't shine?! Am I really supposed to care? I'm cussed enough tonight not to.

Pure cussedness means never having to say you care. It's too busy kickassing its way through life and the day. Look at Popeye. He's got about 40 cans of spinach flattened under his shirt, so he's half metal. Anyone  hits him, his chest puffs out like a battleship and he wins again!

Have I ever had my moments of doubt on pure cussedness? Moments? More like decades. And what's it done for me, being Mr. Softy and very congeal? (Ha ha). Pro freaking shiatsu, nothing! I'd like to kick the sweet acidophilus of the guy that turned me off to it.

Grandpa had pure cussedness, and if it wasn't 100% pure it was dam close. He was known for about five things: 1) Hunting, fishing; 2) Digging the meat of the goodie out of hickory nuts all winter; 3) 4) I can't remember 3 and 4; and, 5) Cussing. No doubt he'd kick my sweet acidophilus if he ever heard me say acidophilus, and not the purer "ASS." And for the most part he didn't care, except, as I said it before, he would not drop an F bomb when women or girls were present. Us boys got that extra thrill, which is nice. I felt special as a guy.

Here's a true incident, as best as I can remember it. I'm not going to remember every word, of course -- it was sometime between 1965-1967, in there -- but I can summarize it close enough that you'll get the idea. (This ain't about my Grandpa, but he was at the campgrounds somewhere.) We were all at a campground, and my cousin was demonstrating through gestures and cussedness how he'd recently shot a bird that jumped up. F bombs galore, no adjectives and barely any nouns that weren't cussedness. One hell of a story.

Then there was this guy -- an adult -- who had a tent that was an ex-parachute, circular and very nice. Him and his wife got to be friends with us and our whole family. We even wrote to them for a few years. This guy saw us gesticulating and reliving some major event, the shooting of the bird, and came up the hill and asked us what we were talking about. It was funny, because since he was an adult, my cousin retold the whole story without a single cussedness, and it came out about the same, the bird jumping up and being shot down.

When we were separated from him -- he was back down close his parachute -- we were walking along and laughing and recalling vividly the difference between the two stories, celebrating both the cussedness and the quick replacement.

What makes the world go round? Cussedness. What makes the weary beaten pro wrestler, who can't even lift his arm, suddenly not only lift his arm but rigify it locked in place, to the dread of his abuser, now begging for mercy that will never come? Pure sweet cussedness. That's it.
Posted by dbkundalini at 9:23 PM