The Roast for God Bless America 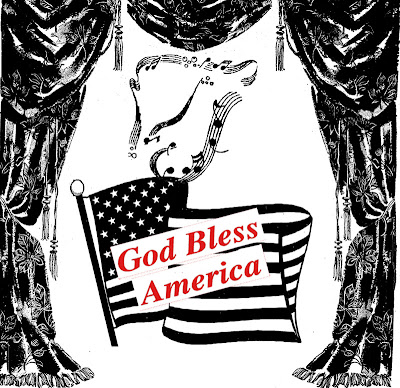 We're gathered tonight to honor God Bless America, and to say, You're one hell of a song. But it wouldn't hurt you to have some humility. You're one of those rare songs that stands up when you hear yourself sung. How patriotic ... but over the top. We'll run you up the flagpole and see who salutes.

Our friend here, as you may know, was written by Irving Berlin. Great guy, huh? You remember Irving? He's the same guy that gives us blizzards every Christmas. Martin Luther King dreams of opportunity and equality for all. This guy dreams of snowstorms.

But, really, I suppose if you're a composer messing around, this is a fairly good song, a good idea. But you know how he got the idea? He hit his thumb with a hammer and his mother was standing there, and he goes, "GOD! ... bless America..." True story. I could've composed this song, or anyone of us here. That's what they do in composer school, hit their thumb looking for inspiration. But only Irving, and Yoko Ono on a couple albums, cashed in on it.

Speaking of cashing in, I hate to make it sound bad, but our friend here is -- I want to put it mildly -- something of a charity case. Irving turned over God Bless America's rights and royalties to the Boy Scouts. Thanks, Dad! That's why we don't have Boy Scout cookies; they get their money from him working all day. Someone wants to sing him, the Scouts have their hand out for a dollar. Or in the case of a football game, thousands of dollars!

So the more people sing him, the more money they make. Which is weird, in a way, because we sing him mostly when times are bad: World War II, 9/11, or when we hit our own thumb. It's then the Boy Scouts show up with their hand out. They're taught to cash in on everyone else's misery.

Anyway, we really have to feel for him, right? How would you like to spend your life camping out with 10,000 boys? If you see nothing wrong with that, see me later, you need help. They're supposed to be well-behaved but they're really little monsters. You know the part about them always tying knots? Well, guess who they practice on. (Motioning to God Bless America). They've chased him from the mountains to the prairies to the oceans white with foam. But that's not foam, he's frothing at the mouth! God Bless America wishes he could stay home on a nice foam mattress and get some sleep.

But he's here with us tonight, among adults. We're not going to make you gargle tadpoles, which was the real reason I quit the Scouts. My breath was fresh enough. Nothing quite that pleasant! Ve have vays of dealing vith you! All in good fun, of course. We might send you to Russia and let you fight it out with their song. Or North Korea, still working on their song. As the old saying goes, "First prize is a kick in the ass."

You know, I've always thought, as songs go, God Bless America is kind of short. One little verse plus a little intro bit that I haven't heard since Kate Smith died. That's right, the great lady died. Singing one day and just choked and keeled over. They thought that was it for our friend, too, since he was wedged in her throat at the time. Bad place to be. Wrong place, wrong time. He'd always been able to escape before, this time he needed the jaws of life. They were still working to get him out just minutes before the crowd was going to sing him at the funeral. They got him backstage, looking like hell, just in time to honor her one last time.

I was saying he's short. See him peeking over the table there, barely? Somebody said, "Sit him up on an encyclopedia!" I said, "We did!" We're sending out for a dictionary, a brick, Rip Taylor's toupee, anything to prop him up ... You seriously need a second verse!

But that's what we've got, one little verse, a tidy little package, which is why he never gets a date. If it's not stag or the Scouts, he stays home. I know, we're getting personal. But what he's got he got from his daddy, thanks Dad! Enough words to get him started, then it's over! "Hi, I'm God Bless America," and that's it. "OK, God Bless America to you, too!" Seriously, that's bad. He walks up to a girl and says, "I'm God Bless America." Of course she stands up, looks down, and walks out. "I've heard of you: 'From the mountains to the prairies to the oceans...', looking for what you ain't got!"

Then, how about the part about the oceans white with foam? I've talked with foam, he wants you to lay off, OK? Foam's basic complaint: if he didn't happen to rhyme with home you'd be picking on someone else. And just between you and me, most of the foam you see is pollution. Foam isn't any great pride to the ocean. Ocean says, "Hey, I've got enough water to flood the world, and all you see is the foam? That's kind of like complimenting a guy for his dandruff. 'I see you have some flakes on your tux, I love you!'"

Anyway, God Bless America, honestly, we love you, you're a good sport. You're a great song, whether you have one verse or a dozen. One verse is always a great start ... just most songs don't stop there. Kind of leaves you hanging, or, in your case, not so much. The National Anthem's not worried. It's got bombs bursting in air, you've got a prairie and some foamy water.

But whatever your limits, all kidding aside, you've been there for all of us right along. If we've been happy or sad, in trouble or whatever, as a nation, you've always lifted our spirits and brightened our day just a little more. That was certainly true in the war. You'd see our spirits going down in the dumps, and there you'd be. We'd all stand again with pride and fight for another day, until finally we made it all the way to victory. One little song with a great can-do spirit, sometimes that's all it takes!

And of course we want to thank the Boy Scouts for letting you out tonight. You can tell them thanks from all of us, and let them know we're taking up a little collection, and the check's in the mail.
Posted by dbkundalini at 10:23 AM