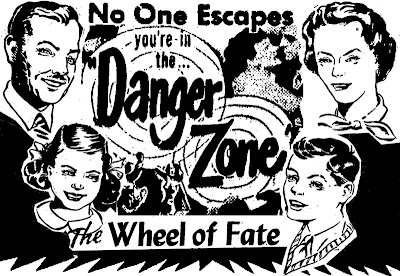 Anyone else remember the old days when we had a lot of pure danger, when, frankly, we didn't care if people drove their cars like skateboards. I remember a guy in school who got his car stuck on top of the swing set and no one cared. We all just piled in the car and saw how long we could balance it without falling off and killing ourselves. Years later at reunions we still observe a moment of silence for those 15 poor souls.

Danger was an everyday thing. I think of old fashioned elevators, no gates, or a gate where a kid can lose his finger. The door opens and the elevator might be three stories down and you step into the void. I can barely stand getting into a modern elevator with all the safety features, too cushy. Yes, there's a phone to call for help. But it's just for show, the danger's so minimal.

Wow, my memory's going crazy! Fans without screens, sleds with sharp edges, dinosaurs roaming free. No safety standards. It wasn't uncommon to see guys with one leg, one arm, one eye, and even nothing, walking by, or struggling to do so the best they could. My grandpa used to tell me tales I could barely believe. He said it wasn't unusual for half his school to have the Black Plague. They blew their nose a lot and did their best. They treasured learning so much they just sat there and suffered.

Even today -- Hallelujah!, things haven't changed in some respects -- we still have danger. Barbed wire comes to mind. The nanny state still hasn't gotten around to putting little safety caps on each barb. You can prick yourself on one of those and bleed for hours. Doesn't feel so bad. You get some of that rust in your system, especially if an animal died somewhere nearby, and it hurts like hell, then everything starts locking up on you, there's bile everywhere, etc., it's a beautiful thing.

This would be a good sociological study for someone: Figuring the correlation between making society safer in external things things and the nature of Man vs Man violence. Of course you can guess my thoughts on that. Man vs man violence is way up, ironically, while we're making life safer. It could be there's something in us that wants that intrinsic danger to life. Or it could be that psychos and antisocial halfwits used to die earlier, before we had child safety caps and railings, meaning the rest of were spared. The weird thing about that would be: The more dangerous life was, the safer it was. However it was more dangerous to the ones who wanted to make it more dangerous for the rest of us.

It was an ecological balance -- very fragile -- that we've now tipped more toward danger the safer we've become. And, this is embarrassing, the danger in life that I claim to remember fondly is still there, only it's shifted to Man vs Man violence. So what's my complaint? I guess I still have a complaint: I much prefer losing a hand in a bad elevator to losing my life to a psycho. Personal responsibility was key, but this is the fly in the ointment, even back then it wasn't permissible to simply kill psychos; you had to wait for them to stumble over a land mine on the way to school, or something.

Looking back, I can't think of precisely how long it's been since the change came. But I believe we can peg it as coinciding with some asshole tampering with Tylenol bottles. Wasn't that it? I believe so. From there it was safety caps on everything, then little plastic wraps on the caps, then safety warnings. Now you can't do anything without robocops and nosy safety officers behind every pole to warn you. Ever notice all the parents with their kids on Halloween? Back in the day, my parents used those hours to catch up on romance, which is how I got brothers. That's why we had such large kindergartens, all those late July births.

But is life perfectly safe, aside from Man vs Man? As it turns out, there actually are exceptions, heh heh. Antifreeze comes with a safety cap, but no inner seal! So that's something to be thankful for. I don't know if it has a label warning you not to drink it. I personally wouldn't drink it. I love life and am not a psycho. But if some future mass-murdering psycho were to off himself with a shot of antifreeze and a good stiff Quaker State chaser... who's to object? In short, the more dangerous we keep life, the safer we'll all be.
Posted by dbkundalini at 7:34 AM