They Say I Can't Be Serious 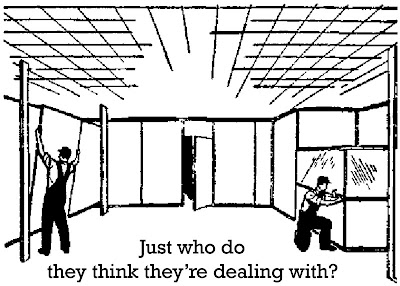 OK, timeout, I've been taken to task, ho hum. Called on the carpet, as they say. Which is tiresome, to say the least. Leaving me a little -- what? -- mentally drained, somewhat confused... I seriously can't describe the full extent of my feelings. It's like being hit in the gut, like having the wind knocked out of you. You think, Wow, I've been doing my level best; that ought to be beyond dispute, but, no, naturally there has to be someone, certain ones, who sees it differently.

What's it all about? I'm not too sure it matters that much what it's all about. The pure fact of the matter is, It shouldn't even be an issue. I've always been a 'Live and let live' guy -- if people are putting forth an effort, you know, judge them on their merits. None of this cheap shot stuff. I'm trying my best to refrain from cussing, you can probably tell. Just to prove it, I easily could've reeled off a half dozen swear words just in the course of these two paragraphs. Believe it, it's buildt up inside. I'm at the boiling point, although I'm trying really hard to keep it ... cooool. Chill out, this too shall pass. Some people aren't worth bothering over. Tell yourself, It wasn't meant as something bad. Although it no doubt was.

I will do my best to offer up a refutation, for what it's worth ... call it therapeutic. I learned this as a kid, something called the old 'Count to 10' method. You breathe and you count, you count and you breathe. Breath in, 1, Breath out, 2, etc. I recommend it to anyone in similar circumstances. You know, the fist you save might be your own! Putting it through a wall, or flattening it against a brick obstruction, none of that's any fun. True, while the fever's hot, it doesn't hurt. But just wait, pretty soon you'll be cooled off and it'll hurt like hell. Then you have to go to the doctor and get it X-rayed. Their first question is always, "What happened?" And you're a little ashamed to say. Tripped over a pop can.

Anyway, let's leave the self-help advice till later. What do you mean, I can't be serious? That's a statement, a criticism you can take two ways: 1) You can't be serious, in that you're flippant. But that's not it; 2) It was more like this, You were trying to make a serious point, but I judge it as so ridiculous -- your thinking -- that I have to say, You can't be serious ... I both condemn your point of view, and I condemn you. OK, so that's how it is, you sad sack of ... equestrian dung. That's what I think of you! How you like them beans? Doesn't feel so good now, does it?

Disagreement is one thing, but out and out condemnation -- without allowing me the chance to respond and present my case, that's something that ought to be out of bounds. I'm sure it is out of bounds, usually, like at the level of intelligent society, like at the United Nations. One country might hate another country's guts, but at the round table everyone's good friends. They keep the condemnation on the up and up. It's not a knife in the back. You're among peers with some standards of decency, not just cutthroats. Really, though, for the rest of us, apparently that's too much to expect... Bombs away!

Well, here's the truth: Opinions are strong on these issues whatever point of view you take. I accept that. Naturally, I have my own opinions, strong opinions, and simply felt the time was right to state them without the fear of judgment. I'm not completely reticent. Forgive me, I didn't know that was the unforgivable sin. Know what I mean? I'm looking to you for a little bit of fairness, that kind of common levelheadedness Do unto others thing that, I thought, marked good society. If we then differ, so be it, but let's differ in a respectful way. Not with the kind of ignorance that was displayed, more akin to large sacks of male bovine droppings than rational discourse.

I like the graphic above, which sums it up. It makes my case perfectly, worth a thousand words. We have a building, a large room. But behind it all you have all the scaffolding, the structural design, the materials, etc., and the ability of well-trained men to put the pieces into place. They're working together. They finish their task, leaving the building (or the room) for the purposes behind its ultimate design. And what I see is a bright inner sanctum behind those doors, from which can come even greater purposes, the purposes of the mind.

On the other hand -- and I hope we're mostly in agreement on this -- if we give way to endless quibbling and gainsaying, the terrible prattle of the mindless; if that is to be the order of the day, then of course all bets are off. As for myself, I believe I've done everything I can to rise to the occasion. I'm a decent guy. Can the same thing be said for those who would naysay?

I realize there are those who try to set it up so they can't lose. But at what human cost? How appropriate is that? Good luck in the long run! You think you can arrange it so I can't win? Permanently?! Think again! If that's what you're thinking -- and if that's the way you want it -- I need to warn you, Your day of comeuppance is right around the corner! Because the honest-to-God truth is, I know that not everyone agrees with you, whether or not they're presently willing to stand up and say so. That's the truth. Which I know you'll find hard to believe.

But, please, look within yourself. If you do, you won't believe for a second that I'm saying this simply out of my own imagination. I know how that goes, A guy is sensitive, naturally he lashes out without regard for truth, looking out for his own wounded feelings. I assure you, it's not that way with me. My gaze is undiminished. For me, this isn't "Rally 'round the flag" time! But can you say the same? If you're answer is yes, to me, that's porcine excrement, heaped up and rolling down.

I'm going to say this sloooooowly: So listen up, you mindless individual serving of Number 2: This isn't merely a matter of pride on my part. Pride? What do I care about pride? Pride is false. Glory? There's no glory worth having, as the sages say. Who, incidentally, then end up with the greatest glory man can give, which they in turn disdain, as I do now. Am I calling myself a sage? Sages have sagacity, that is, wisdom. I guess I do have something natural in that regard. But even a kicked animal could say the same, if it's kicked enough... Pathetic...
Posted by dbkundalini at 11:25 AM