The Ignorance Of The Purebred Libertarian Student 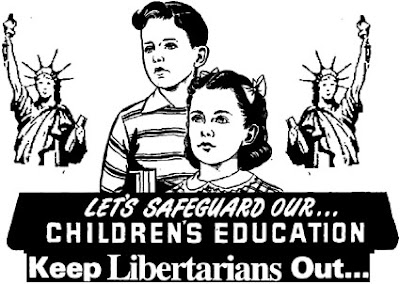 I love stories like this, where ideology screws up reality, and the guy ends up a total shipwreck. Usually, however, you don't have the pleasure of such a pure case; often you're faced with an admixture, generally rooted in a life somewhat inconsistent with the ideology. I was very fortunate to come across this story. It's pure! I'm sure that thinking of it will give me many pleasurable nights, sitting by a warm fire somewhere drinking brandy or something else.

OK, without further ado, we have a kid from a poor Libertarian family. That's the setting. For legal purposes I'm going to call him Walt.

Because Walt's family was poor, they couldn't afford to put him up in a private school teaching Libertarian values. And yet they didn't have the option of no schooling, thanks to the unnatural rules of government on compulsory attendance. And they couldn't home school him.

Walt was just a kid, but that didn't mean he hadn't imbibed his father's ideology. Dad made a point of loudly sharing his beliefs in limited government, taxes, individualism, and hyper-individualism. So when Walt got to school, he cried like a banshee. With him it was me, me, me; nobody could do him any good.

In short, he was completely uncooperative at school, because he didn't want to be on the public dole. That's how he put it. He felt he wouldn't be pulling his own weight were he to cooperate in a system based on taxpayer-funded institutions.

Even at five years old, he was a real go-getter with this nonsense. If the teacher tried to talk, he might put his fingers in his ears and go, "[various babbling noises]." Walt was extremely disruptive. They put him in the hall and passed him to the next grade as soon as possible.

He wouldn't take part in music, for the same reasons. He didn't want a publicly-supported instrument. He didn't care if it was a bass fiddle (large) or a piccolo (small), he had his crazy, inscrutable principles to abide by.

Other kids were advancing like mad, learning how to read and write, how to add and subtract, how to play their instruments, how to take care of their bodies in physical education, and so on. But not Walt! Walt was stuck with his pre-K mentality, except of course to the extent that he just naturally learned things once in a while by brute experience. Still, he started out a fool and was even a fool years later.

Years came, years went. Walt never brought home anything for the refrigerator door. As far as I can tell, his life was a blank, except for his stupid principles. Sad, but funny in a way.

He made it through school without learning much of anything, got his diploma, asked a friend what the damned thing said, and was told it said "Diploma." "That means you're smart." "Damned right I'm smart," Walt was able to vocalize, "smart enough to throw away this diploma, which was taxpayer-funded and not of my own making." Now that's radical!

Fathers, if you're wacky, a Libertarian, if you think UNICEF is a Communist plot to overwhelm the world with their well-fed healthy children (an element of the plot that should be mentioned), keep it to yourself. Your kids are worth more than that!

Commentary:  Is this a parable on modern times? Is it a condemnation of Libertarianism? Am I trying to make a large, relevant point? No, none of that, none whatsoever. It's simply the story of a kid, a purebred Libertarian, who imbibed his father's ideology, and managed to make it through school without learning a thing, simply because he wanted to pull his own weight and not be on the public dole.
Posted by dbkundalini at 9:27 PM

not imbibing learning from public school is no small accomplishment