Peacetime Has Ruined Our Restaurants 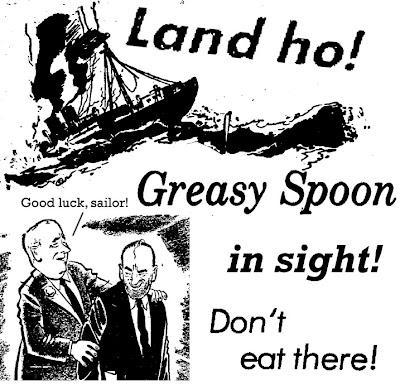 Here's the good news, the war's over, the sailors are all home. The merchant marine fleet also has docked and the crew debarked! They battled the South Americans to a standstill and now it's over! Hallelujah! But there's also bad news. First, their unfaithful wives came clean to their many sins and dumped them. And, second, they've all gotten jobs as waiters at the restaurants I go to.

What a war it really must have been! I can't remember what it was all about, but half of it took place in jungles, and that really ages a man, makes him gnarly, gruesome, and tough. And tattoos have to be the national past time in those forsaken ports whenever there's leave. Because the sorry sacks have been through the mill. I'm sure they'll regret it, especially the prominent tattoos of their wives' names.

Really, their wives are better off with whatever trash they've found stateside. They've kept warm at nights -- I'm guessing warmth had something to do with it. Because these guys are in bad shape, the war did a number on them. They're all messed up. War is the human grinder, unfortunate for them, and certainly making a mess out of my restaurants. They're always looking for waiters, it seems.

But it's also tough for us, thinking of me in particular. It's tough to go in, paper under my arm, with my dignified look and an appetite to die for, and have to see sailors and drifters trying to memorize my order. Of course they're going to get it wrong. As for your tattoos, try to find a blank space and just jot my order on your arm somewhere. Then if I want to know what I ate today, five years from now, I'll come and read it.

You don't know what's going to happen if they do happen to get it right. The plate's going to come back with human fur in your food, grease from the ship dripping off the edge, and whatever other begrizzled bits of offal one of these specimens might drop, or shed. Basic hygiene, more about that later, doesn't prevail. But since we're all into recycling, there's a little good news: That greasy apron, a dishtowel tucked in the pants lengthwise, is the same one he was wearing last week. Same stains and everything.

I think I remember a Popeye cartoon sort of like that. The war was over even back then, and Popeye was a waiter, waiting on Bluto. Popeye has a big dirty dishtowel around his normal sailor outfit, waiting on Bluto, and of course still smoking his pipe, squinting at the big man's food, and getting ready for a fistfight.

Here's what I want, restauranteurs: No mustaches. And mandatory tattoo removal. And short hair on men, clean, not a shaved head. Anything longer than an inch or so -- I'd rather their hair look cheerful, like the hair of an average five year old kid -- must be trimmed before returning to work. Their hands must be washed according to the Lord's standards, which is, scrubbing your hands with soap as long as it takes a person to recite the Lord's Prayer at a normal speed. This isn't the old days when we ate around campfires, with any old thing someone could shoot or trap unaware in the corner.

And I want decent coffee. Some of these old war boys don't know how to make decent coffee. Seriously, they'll be telling people 70 years from now how they learned to make coffee on ships, a big boiling pot set on the fire all day, with grounds continually dumped in. Think of a spaghetti pan about five times the size, with 8 inches of old grounds settled in the bottom. Coffee with that old bottom-of-the-pot wang, probably made like this one old boy said, just keep adding fresh grounds and stir.

The waiter needs to be someone who got up on the right side of the bed, and looks it. He needs to be perky, intelligent, with a good memory, and a pleasant personality. These hardened sea hands -- think of "The Deadliest Catch" for the type I'm thinking of -- would make anyone lose their appetite, which isn't good for the bottom line of the restaurant either. Disinfecting once in a while is good!

Preferably, we'll get the women wait staff back, nice ones, so if their germs fall in the food they'll be harmless. Honestly, it's too bad the damned war had to end, wherever it was, South America, I guess I said. As should be abundantly clear, it hasn't been good for my restaurants.

Note: I may be wrong about these rare human specimens being wasted-away sailors. It could be they're just other weird guys who haven't taken care of themselves.
Posted by dbkundalini at 7:04 PM