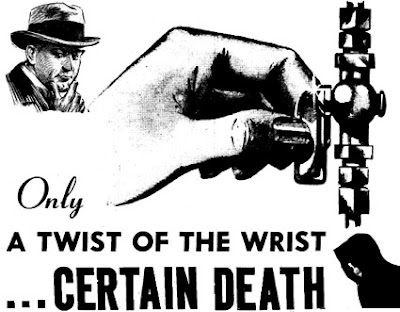 My new best friend Death (see links below) is a busy fellow. Everyday -- virtually everyday -- I read of his exploits in the paper and online. He takes down a maniac holed up in a mountain shed (yea!), or he's snuffing out the life of a baby at the hands of abusive clowns (boo!). Clearly, Death, with the nature of his work, doesn't have the same social mores and scruples that I was conditioned with. Who's right, who's wrong? I guess he has to be right, not just because of cause and effect, but because of his rootedness in nature, whereas I'm obviously socialized and sentimental.

But that's a discussion for another day, which may or may not come, because I'm not feeling so well myself. Although I have to say, if Death kills me, I'm going to seriously reevaluate our growing friendship. Although, furthermore, who knows if I might enjoy the afterlife even more, when I'm finally reunited with my grandparents and dad somewhere in the sky, on a cloud without the fear of monthly bills I can't pay.

Anyway, I asked Death -- how about it? -- could I go with him on one of his runs? To my delight, he said yes. It was just a matter of temporarily transforming me into a form of mist, since being merely flesh and blood is not the best way to go on these runs. He sat at my table and mistified himself; I could see just a vague, light black mist in the air. Suddenly, I also was a mist, but more white. There would be no way to tell us apart, save for the color of the mist and the fact that I was here and he was there.

His run this night was to a downtown hotel in the big city 40 miles west of here. It was one of the upper floors, an office where a guy, older and depressed looking, was wringing his hands. I'm big on making snap judgments about people, so I could see he was clearly in deep trouble, likely some financial malfeasance, or political shenanigans, or they were bearing down on him for breaking serious laws of some other sort, or he was complicit in a sexual matter involving himself and a younger mistress. Whether she's underage, barely legal, or what, I don't know. I'm guessing she's probably in her 30s, old enough to know better.  And there's his wife, a fat old biddy, sitting home somewhere, about to sic the lawyers on his ass. Or it could have been he had weird fetishes I could never guess, although I didn't see any tattoos or piercings.

Death and I -- clearly invisible to the guy -- hovered in the corner. I watched the guy toss and turn in his chair, sweat all over his forehead, his hair very wet. I had to sympathize with him, even though he looked like the kind of guy who'd step over me for a dime; I'm just naturally sympathetic, a nice guy; it's my cross to bear, again, my own blasted conditioning. I just had to remember, there was nothing I could do to help. In fact, I tried to hover down to him, but it was like I banged up against a force field.

What I witnessed next is the crux of the matter. And if you don't want to hear about a successful, agonizing suicide, please read no further. I write none of this out of jest or to celebrate. Because I feel the guy's life was still worth living. He could've given his wife the Cadillacs and jewels, he could have plea-bargained on the financial malfeasance, or if it was big enough, he could've endured the shame of a public slap on the wrist. But at those points of the worst depression, of course you're not always thinking of "could'ves." This guy was only thinking of escape. And Death was only thinking his number was up, time to die. I saw a look in Death's misty eye, like an evil hypnotist.

The guy -- let's call him Walt -- had an elaborate suicide machine installed in his office, just for occasions like this. It was pipes and a faucet. He was going to flood his office! He reached over and, with an unusually feminine hand in appearance, twisted the knob full blast. I had to reflect: Wrists are made to connect your hand to your arm, not to kill yourself with. But water gushed everywhere, making the floor wet and no doubt promised mold for the whole hotel for the foreseeable future. Walt sat in his chair motionless, then on second thought pulled out a final cigar and lit up.

Excruciating time passed, the office continuing to flood. I looked over at the door. It seemed to have a good seal at the bottom. The windows were shut with a good seal, too, and waterproof glass, so they weren't about to break. Then the water was to his knees, to his hips, to his chest, to his neck, etc. Suddenly, whether he was having second thoughts or what, he was out of his chair, swimming desperately around the room. He had a purpose, which I took to get to the spigot to turn it off. But he couldn't do it, and I was trapped behind the force field. Even were I to break free, how does white mist operate a spigot?

The look of desperation and terror on his face was the worst thing I've ever seen. A memory seared in my mind, likely to endure the rest of the month. I glanced at Death. He still had that hypnotist look. He would make one hell of a levitator. With those eyes he could sell moonshine to Mother Teresa, had he not already killed her. I looked back at Walt, swimming like crazy. I started thinking, a bunch of water gathered together weighs a ton, and it was almost up to the upper wallpaper line. Walt was on his back, kicking and gasping for air near the light fixture.

At that point, I knew Walt was going to drown. But, wait, what's this? The floor suddenly gave way from the weight of the water! And right down went the whole works, office, Walt, and water all. We hovered downward and the poor dude was dead from the fall, a broken neck. The force field was totally gone, but I was too late to help. Alarms were going off everywhere, it was nutzoid. The police came and rounded up the usual suspects, who all had great alibis.

Back home, back in my body, with Death again at the table, we reflected on the journey. I commented that their alibis, unlike the office in the end, were completely watertight.

Links:
Death -- I Now Pronounce You Dead
Out Drinking with Death
Death Goes to the Dentist with Me
Death -- When Your Number's Up
Posted by dbkundalini at 12:04 PM