My Picnic With Death 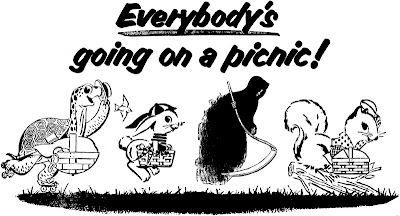 April's always iffy. We've had some really cold days and some really hot ones. So you take what you get, especially if it's nice, and make the most of it.

I was hanging out with my new best friend, Death [links below], on one of the hot days a couple days ago. We were just lounging around, he wasn't in a big toot for official business, it seemed, so why not get out of the house for a picnic? Sounds good, huh? Take the day off, have a good time, and spare the world at least those few minutes of pain.

I like packing up stuff and going out to one of the town's great parks on a day like this. For this picnic we chose the one with the old Air Force jet. Death and I actually went over and sat in it, messing around with the steering wheel. It's still substantially there, the fuselage, etc., although of course kids over the decades have left the control panel and every gauge totally destroyed. But that's life, bad things happen.

I was tending the meat at the grill. I'm sorry, I like it done right. We had a full picnic basket, with beans, potato salad, chips if we wanted some, celery sticks, baby carrots, some small snack cakes for dessert, and a six pack of Pepsi. What a great day, very little wind, and only a few other folks in the park. I worked while Death messed around with a Frisbee, throwing it against a tree.

That wasn't all he was doing. He was sulking a bit. He wanted to do the cooking, but I wasn't trusting the meat to just anyone; I wanted to do it myself. So he messed around with the Frisbee, and wandered off a time or two ... for who knows what. Clear his head probably, and maybe cuss me out. But his official story was: One, he needed to make a call. Two, he forgot something in the car. And three, which I didn't need to hear, he took a piss behind a tree. After a while, with all this excusing himself, I felt like a solo act, but on the bright side the burgers were doing great.

Later, then, we're busy enjoying the picnic, the fruits of my labor, our plates full of great food and all the fixin's. The only thing spoiling it was a bunch of sirens. There was some kind of commotion. "Wonder what's going on?" I asked. Death said, "Great question, sounds like something big." But I didn't know what, and apparently he didn't know. So what else to do, but enjoy the fun, food, and beautiful day.

Next, we saw ambulances going by, coming from the north ... very unusual! I said it had to be something big, because those are ambulances from out of town. Other towns were pitching in, part of the good neighbor policy the county has. There was a steady stream of them, their infernal sirens starting to give me a headache. 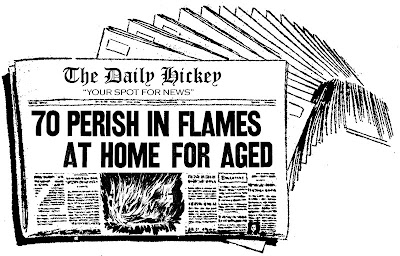 Imagine my horror, then, the next morning, when I saw the news: What?! "70 PERISH IN FLAMES AT HOME FOR AGED." The details were terrible! Destruction, panic, a horrific end to so many dear souls. A few of them from The Greatest Generation, no less. And it all went down at the very same time we were having our damned picnic!

Death was just getting up; he was sleeping on the couch. He came toward the table and saw me reading the paper and turned around. I called him back, "Stop it right there, mister!"

He looked guilty as sin. "What the hell? I thought we were having a great time. The meat, the chips, the Frisbee... And this is what you were up to all along!? Killing 70 old folks while eating my celery and carrots!?" He had a concerned look on his face, but gathering up all the boldness he could muster, blurted out, "I told you I wanted to grill..."

I have to say, that took my breath away for a moment, and I could only shake my head in disgust. But you know me, Mr. Mercy, I can't stay mad at him for long. Especially when you think it over, that's who he is! That's what he does...

CONCLUSION: Yes, the picnic was messed up by Death's terrible behavior, actually killing 70 dear old folks at the home for the aged. But one thing we can still be thankful for. It was April, it was a picnic, and there wasn't an ant in sight.


Dead Links:
Death -- I Now Pronounce You Dead
Out Drinking with Death
Death Goes to the Dentist with Me
Death -- When Your Number's Up
Walt's Suicide -- Death by Water
The Gaping Maw of Death (Woof! Woof!)
Posted by dbkundalini at 1:07 PM