Don't Talk To Me About Mulch! 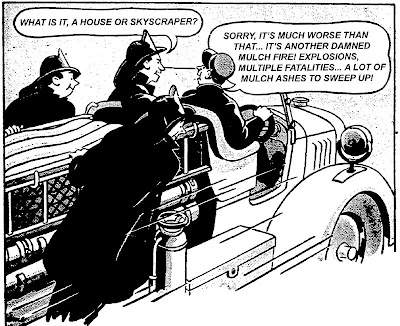 I was at the gardening center the other day. I like a good tomato once in a while, which means growing them. I ran into a guy I know there, someone really into gardening, environmental stuff, etc., who suggested I should use mulch.

I'm sorry but this is a very sore point with me, whether he knew it or not. In fact, he was probably innocent, I don't know. But I totally lost it. I recoiled, and nearly went into a three-alarm meltdown. I felt such a rush of anger, it was palpable, I flushed, I was beside myself, in just a total crazed state.

"Don't talk to me about mulch!" I shouted, bringing a ton of unwanted attention to myself.

Years ago, it was a day very much like today, sky, earth, people doing things. I was in traffic downtown, sitting there waiting at a light. A guy with a pickup truck full of mulch, but with no gate, was right ahead of me. When the light turned green, either he was a very careless driver, or somehow his foot hit the gas and it went down too far accidentally, he roared ahead, with the mulch spilling out in a big pile just in front of me, with me also having already proceeded toward the intersection.

My car would go no further, I was lodged on top of the mulch! Now I know I should have immediately turned the car off, but being in shock, I jumped out. The car still running, the engine being hot, and mulch being essentially gaseous weeds, the whole thing went up in flames. Of course the fire followed the gas line back to the tank, and the whole back end exploded, killing the three people in the car right behind me. The flames were so random and so hot that I myself was burnt, scarred, I thought, for life.

In the years since, I submitted myself to very expensive reconstructive surgery, so that I am not so bad off, except for the monthly payments I still make. But enough about me, the families of the corpses behind me saw an opening for a quick payday. My insurance company presented me with a copy of the policy which, hard to understand, did not specifically cover mulch fires, so I was on my own. They wanted $5 million apiece, but since they couldn't get blood from a turnip, they settled for monthly payments of $1,000 for life, so that's three thousand bucks down the drain every month.

You may be wondering how I was liable in all this, since I was quite innocent. That's true, but this is what a fool gets, the court settlement he gets, when he's stupid enough to represent himself. A little plug there for lawyers. They've cornered the market on legally representing people, and they deserve it.

All this time, believe it or not, the original mulch truck driver, who dumped and ran, was never apprehended. I couldn't identify the truck. I was so focused on the mulch, that's all I saw. That, and the driver had a bright red mohawk and a tattoo of Satan on the back of his neck, but that could be anyone.

Ever since, life has been hard for me, virtually impossible in fact, but I plod along as best as I can, with occasional moments of happiness, like a slice of a halfway decent tomato. Is that so much? It's just that -- call it a sore point, something that easily repulses me -- I don't want anything to do with mulch.

The guy in the gardening center had a look of astonishment on his face. "I- I- I didn't know. But I now see that mulch is definitely a mixed blessing, good for some things, not so good for others..." He trailed off sheepishly. I thought about pursuing him in argument, with many smart alecky things I could have said, like, "Mulch, my friend, is good for nothing!" But I let it go. Being so persecuted myself, I've gained in mercy by leaps and bounds.

Anyway, he had his hands up, as if to say, "Let's drop the whole thing, let's call it even, you go your way, I'll go mine, live and let live, let me crawl into a ditch somewhere and die, I'm so embarrassed." Like I said, I let the whole thing go, with my mercy and all, and put my hand up, more or less as a gesture of consolation and dismissing the whole subject, but really I was thinking simultaneously that my intent behind the gesture was as if to say, "Please, don't ever talk to me about mulch. You've now had fair warning. I've been through more than you can ever understand. Go preach environmentalism and mulching gardens to someone without the benefit of real world experience."
Posted by dbkundalini at 12:50 PM