I Inked A Pact With The Police 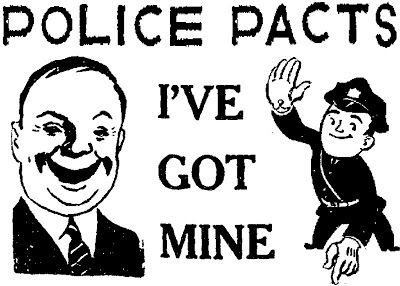 I recently inked a pact with the police department. The basic terms state that I'll stay as good as I am, and that they will behave themselves regarding me. Now, according to the pact, when they see me in my car or yard or uptown, they'll remember I'm OK (good) and go about their business.

This is an old law, I guess, maybe a tradition, my grandpa told me about one time. They used to do it all the time, back when the police was more or less a ragtag organization of everyday citizens. They couldn't be everywhere at once. So your basic good citizen, like my grandpa back then, or me now, goes in for the pact-inking ceremony, and everything's hunky dory from then on. I've talked about it with others and hardly anyone's ever heard of it.

But the police still know, at least they did when I showed up. I filled in the paperwork and the whole thing was arranged. I went in and inked the pact with the chief and some of his underlings, sharing a ceremonial donut to seal the deal, which I don't eat in other circumstances. We exchanged handshakes, and as a sign of citizen-servanthood, showing my spirit, I spit-polished the chief's badge.

On my way out, the whole team of officers formed rows and a walkway down the center of the station for the chief to walk me to the door, where I promptly embarked my car and drove away in adherence to the speed limit. A little under the limit, actually, as an expression of good faith.

OK, I'm good all the time. So why do this obscure official ceremony? I think there's a lot of value in it. It formally reminds the police of their role in society, that they're there to serve. And for me, or anyone, that I'm here to be a good citizen, supporting the various pillars of good order. We're looking out for one another, something I take very seriously.

Now, for the absolute truth, they being a force, and being a multitude of individuals, have a tougher job of regulating themselves. All it takes is one bad apple. So they naturally benefit more from the ceremony, reminding themselves of their duties and giving them something to consciously live up to. Also, they can exert peer pressure on any potential bad apple in the bunch. If they can behave themselves in relation to me, and others who've inked a pact, that carries over for benefits to society as a whole.

But I'm just one person. So as for me, the ceremony has lesser value, except to protect me from them. Because I already know I'm going to behave myself even without having inked a pact. But I suppose it's good to be reminded. It could happen, say I was a lesser individual, that I might have a brain fart and go ballistic on society. (Don't worry, I won't.) But with our pact, if I felt that coming on, I could reread the pact and make more honorable decisions on guiding myself in society. Again, the whole thought of any of that happening, me going ballistic, is ridiculous. However, with the pact, it's even more farfetched.

Ultimately, the law and law enforcement are for those who have not the restraint. With the pact completely inked, and with any concerns the police may have ever had about me gone, they are now that much freer to deal with those other people.
Posted by dbkundalini at 12:43 PM