This Is The Signal 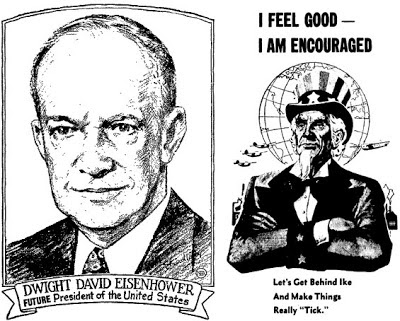 This one man was the great man, General Dwight D. Eisenhower, answerable only to the president of the United States, which he himself, unknown at the time of D-Day, would one day be. If we could mash time, you could say he was ultimately answerable only to himself. But that wasn't his concern. He wasn't thinking of future political attainments, although it could've been in the back of his mind.

Ike, alone out of all men, knew the signal that would launch the massive D-Day operation. Although let me back up a bit, someone else needed to know, or it wouldn't make sense ... a guy in a lonely communications shack, just him and Ike. The world's hope over the tyranny of Nazism hung on a shared signal between those two men, the great man and the humble man, who might've had a heart attack and all would've been lost. (That's why we suffer the tyranny of the Republican Party today: Bad hearts from too much junk food and not enough exercise; no one's getting the signal to destroy these SOBs.)

Well, OK, what was the signal? Ike picked up the phone and said simply, "Dead dog." Just like that. I almost hated to say it, it sounds so trivial. But that's the way it is with signals -- they're not always what you'd expect. You keep them secret, like your password for online banking -- mine is "abc123" -- so no one can steal your money. In the case of Ike and the other guy, that was all it took -- "Dead Dog" -- and our soldiers went floating in and wading in, attacking the Nazis like rabid banshees; it was not a pretty sight.

The signal can be a nod, a handshake, or just a glance. I've given a few glance signals, and the other party knows exactly what I'm saying, "Let's get out of here. This party is dead." Or, "The service here is terrible." Or, "Hit the mute, these UPS commercials suck!" Not to pick on them, most commercials suck. But how do you like that one where the guy from Seinfeld is saying, "I'm happy." And everyone else says, "I'm happy," individually and repeatedly. That is so vastly sucky I've only heard it once. The other times have been muted.

Had I been in the meeting for planning that piece of crap, I would have said, "You're either kidding or you're trying to sink the whole company, in which case, congratulations!" Finally, had they taken me to task despite my impeccable wisdom, the signal that I was resigning would have been my extended right middle finger while my left hand would be making the "crazy" twirl at the side of my head and my legs would be advancing toward the elevator, after I had pissed in their coffee and all the plants. "Are you happy, now?! God knows I'm happy!" Happy, happy, happy.

A signal has meaning. We've communicated. There are inner realities, vast and minute at the same time, where these operations and their signals come together in concrete reality. At least concrete subjective reality, which, as has to be obvious, is actually the same thing. But it's worth making a distinction for the sake of clarity and perhaps discovery on the part of some, like me. If I were to look within -- wherever that is -- I could very well flash the signal and end up turned inside out. Break through to the other side. A regular retrojerk moment, although, unlike Jimi Hendrix, I would still be around.

I'm convinced -- convinced, I say -- that nothing is really apart from anything else. Which means even when we're in the gutter we're still in the fullness of the divine. But to experience it positively in this daily grind, there's a signal (or trigger) somewhere, not necessarily known to the ego but still 100% encoded in the consciousness, the consciousness being understood as described in Sri Aurobindo's "The Life Divine." Hear it, notice it.

Now, in case you don't know how it worked out for Eisenhower: The guy in the communications shack did not have a heart attack. D-Day came off as he and Ike planned it. The Allies stormed the beach, a bunch of them got killed, but enough of them made it through to retake Europe, finally leaving Hitler like the steaming pile of shit he was in a lonely bunker.

Adolf got the signal that the jignal was up, enjoyed a quickie wedding with Eva Braun so in the end he wouldn't be living in sin, ate some cyanide and died a terrible death, his 1000 year reign truncated, from his point of view prematurely.
Posted by dbkundalini at 10:43 AM