Me and Wordsworth's Dogs 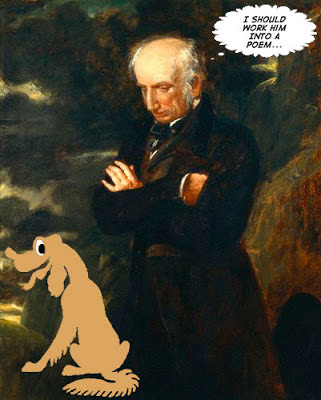 At the end of William Wordsworth's huge poem, "The Prelude," in the Modern Library edition being almost 220 pages, longer than any poem I'm ever going to write, he says, "Oh! yet a few short years of useful life, And all will be complete..." That tells me he was an old man at that point; he lived to be 80. Which is only 20 years older than me!

All this matters today for my blog because of one passage I want to celebrate, from Book Four, lines 93-190, which has some good stuff about his dog. I have lots of thoughts about dogs. One, I'm glad a great poet like Wordsworth took time to write about his dog. He's all right.

Of course, when I read it, I have to think of my own beloved dog. Who would've made a great dog for the great poet, had she not been born in the wrong time and place for it. On the positive side, she was born in exactly the right time and place to be my dog. So that's equally cool. She beat the odds. Because I'm happy to say, If you're not going to be Wordsworth's dog, you may as well be mine. Not second best, mind you, but equal or better. When it comes to poems, Wordsworth has me beat, but not at dogs.

I want to lift out some bits from Wordsworth's poem about his dog. Wordsworth had been away from his home and stomping grounds, at school, far enough away he had to stay there most of the year. Then he's back for summer vacation, then he goes up in the heights, the rocky crags around there, thinking up poetry and getting the inspiration from a favorite romantic locale.

At lines 93ff, he says his dog, a rough terrier, was among his favorites "whom it pleased me well / To see again..." I bet! Who wouldn't want to get home and see his dog? But this is more. Wordsworth was out there kindling "with the stir, / The fermentation, and the vernal heat / Of poesy, affecting private shades..." In other words, his poetic impulses were sizzling hot. But what of his dog? He continues, "Like a sick Lover, then this dog was used / To watch me, an attendant and a friend..." And this even though Wordsworth was so absorbed in his poetic inspirations that he had to halt walking a hundred times, making the dog somewhat tired and uneasy.

LOL. Of course I can relate to the dog's faithful presence. My dog's right here as I write, watching me with concern as I virtually tear my hair out, what's left of it, trying to get every word just right. I have very demanding readers and a very easy-going dog, which means if the situation were reversed, I'd be taking the dog for a walk with a constant lash at my back, or any number of other means of goading someone along. But my dog's very patient.

I'm running long, so I'll summarize the rest of Wordsworth's section on his dog. I like it how he celebrates an especially good burst of poetic inspiration by darting toward his dog and caressing him repeatedly "with stormy joy..." Then they'd be walking along and he'd give Wordsworth advance notice of anyone they'd be meeting on the way. The alert meant Wordsworth hushed his voice, since he was thinking out loud. The dog saved Wordsworth's reputation! Lines 129f, he says people would've started "piteous rumors" about him, saying that he was "crazed in brain."

My dog tries to help me like that, a little. Say I'm writing a blog, she barks anytime I'm about to hit the "Publish" button, knowing I'm only digging my hole deeper. You only see the crap that gets through, you should see what she prevents!

Back to Mr. W. In lines 131-190, he doesn't mention the dog much. Here, though, he's writing as the old man in the present time, not so much remembering past memories. So in lines 182ff, he sat in "the sheltered coppice" and heard "the straggling wind" in the hazel leaves, and it reminded him of his dog: "a breath-like sound, / Quick as the pantings of the faithful dog, / The off and on companion of my walk..." That gets me! How wistful! The straggling wind reminds him of his dog's panting. But of course the dog is now long gone.

I know my dog's getting up there, 14 years old and in failing health. Years from now -- let's say I survive another 20 years -- I'm going to be looking at photos of my dog and ... whatever. But at least I have pictures. Wordsworth had what? The straggling wind. And a great memory.
Posted by dbkundalini at 5:06 PM