Nudity On Display At The Library 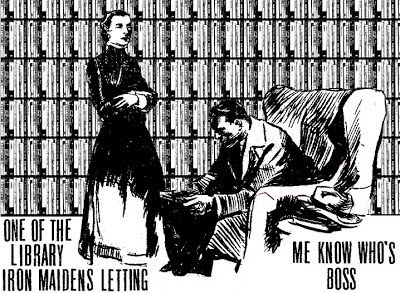 Regular readers of my blog will remember that I am often attacked unjustly, and so I'm often provoked to respond with righteous indignation to put the hapless attackers in their place. Fury flares up in my face, and in the fire of my wrath I speak, reducing everyone to char and cinders.

I can be even more specific. A lot of this umbrage just happens to be directed at hypocritical librarians, who in my opinion talk a good game about the free access of information, intellectual liberty, etc., but then ruin it all by taking me to task over one thing or another. Be it trying to read the Bible in public, a huge no no -- "You can read the library's chained copy with the other fanatics!" -- or exercising my right to pray with my eyes closed; because they're so farking afraid the "homeless" might be "sleeping," there's a zero tolerance policy on closing your eyes; we've clunked heads over that.

OK, here I am once again on the warpath, as our native friends say, and I'm seriously ready to go to the wall for this, hallelujah, Lord be feared. The fury's in my face again, the fire of wrath is kindled, and surely there shall be a great shaking in the land!

These guys are so farking blind to their hypocrisy, it's like they're completely unthinking. Talk about an easy profession! I should've gone to librarian school. If you can lift a bony accusatory finger and contort your face to a nasty scowl, you pass. Thanks to computers, the rest of the work's done for you. My advice, file that away if you're ever looking for an easy career. Don't throw away that matchbook! It's the easiest gig you'll ever have!

Shhh, I started talking out loud while typing that last paragraph, and now I'm getting a few glances. (Yes, I'm writing this at the library) ... The glances are coming again because right now they're watching me, since we were just at loggerheads ... they see me typing fast, they know I'm writing about them. But they don't know what I'm writing. Although I am using their wireless. So they're probably back there tapping it. It does seem like my keystrokes are a little slower than usual. Farkers are bugging me!? Well, OK, if that's what you want, I'll give you something fun to read: YOU SUCK! THE WHOLE DIPSHIT LOT OF YOU! There, I said it, that ought to raise a few eyebrows at Gestapo Headquarters, LOL. Excuse me while I finger the security cam there. That was fun!

Ha ha, pardon the digression. But I was here yesterday, too, and was watching a guy at one of the computers angrily fingering in the general direction of a camera. True story. A big honking righteous erect finger, too; the farker meant business! I just glanced at him since I didn't want a crazy guy on my tail. He was looking for trouble. The big difference today is, I wasn't looking for trouble. But if they start it, what can I do? I could slink out like a whipped pup, but why should I? I'm a man with high standards. I'm actually probably one of the few people here who even believe in the standards the library CLAIMS to support, i.e., intellectual liberty, with you the individual being the only judge of what you need to fulfill your intellectual pursuits. Now for all I know, the guy at the computer was responding to the "adult" block on the free flow of information the library has imposed. If he wants to learn about breast cancer, to heal his poor old suffering mother, completely wracked with pain and begging for just a hint of understanding, which the library callously denies, that should be HIS business!

I need to keep this quiet. One of their employees, a real iron maiden, is within 10 feet of me, appearing to casually rearrange books on an end stand. Sure, of course, I really believe she just happened to need to do that particular stand at this particular moment! I haven't seen anyone rearrange that stand for 10 years, so it must've been due. The fact is, they're on me, it's ridiculous, this is a vendetta. Intellectual liberty, my ass! They're probably out in the parking lot breaking my car windows as we speak. Of course if they do ... well, I won't say what I might do, but if I really saved my pennies I could probably afford a moderately cheap contract on them. Someone to rough up the decorative plants outside.

OK, she's gone -- I can breathe -- she's back at the desk to document the fact that I'm still typing. They're over there shaking their heads. Bastards. 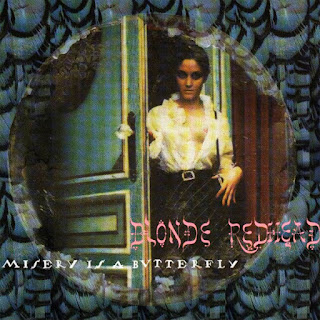 Anyway, I'm listening to Blonde Redhead and one of them comes over and sees it. The lady I'm talking about reminds me of one of those old toy birds that keeps dipping its beak in the colored water. She's skinny like that and always craning her neck and bobbing it up and down. Perfect one for the library. Nothing escapes her nosiness. I had a friend who was legitimately tired -- a very patriotic guy who stayed up all night memorizing American history trivia -- and fell asleep one day. Guess who was on his ass, all ballistic, the same chick. Like sleeping is such a crime. As I recall, his patriotism meant nothing to her.

Well, you can imagine what she said when she saw the Blonde Redhead picture. I won't quote her exact words, except to say she told me in no uncertain terms that nudity "displayed for all to see" was against library rules. "For all to see" ... that's the critical point. The iPod picture is about the size of a postage stamp -- bigger than an American stamp, but about the size of one of those commemorative stamps from African countries that exploit the collectibles market by ripping off celebrities. About that big. Then take the breast, it's about the size of a pea, even smaller. If you didn't know what it was, you'd never guess.

Well, you should've heard me. I told her I could pull five books from the shelf within 10 feet of my table that had nudity. And I went over and did just that, one on funky model pictures, one on pregnancy care, and the others from the works of famous artists. Plus, I pulled out a military history book that had some nudity that aviators had painted on their planes. Cleavage aplenty, meant to bring down the Japs and Nazis. They took one look at American bazungas and knew they didn't have a fighting chance! (I wish they had books like this when I was 10; I would've never left the library. I remember we used to look at the Information Please Almanac, the page on America's Top Magazines, just to see the word "Playboy.")

She had some justification for the difference, coming down to this, that those things are in books and covered up. And, yes, while they are theoretically within everyone's reach, it still takes some doing. (And maybe she's slightly right. Remember, this is a library where kids up to 18-years-old can be restricted to the Children's Room!) Still, I countered that by saying, "When I was eight years old, I would've sniffed out this nudity and had it checked out before you could say Jack Robinson!" Eight years old, smartest kid in town.

Now she started pulling rank on me. She said that I by merely coming through the doors had implicitly agreed to the rules of the library, which comes down to this: "Your heart and mind belong to us, as much as if you sold your soul to the devil." The old biddy was very explicit on this stuff. She'd make a better warden in the prison than a librarian. She missed her calling. She could be in prison clamping electrical equipment to prisoners' genitals and making them scream. It'd definitely match her sadistic nature, rotten turd, and might even bring a smile to her dour old puss.

OK, I had one ace up my sleeve left to play. With great determination, I strode to the library's CD collection and pulled out the only Blonde Redhead CD they have, albeit a different one, right there in plain view of everyone who cared to see it. (My theory was: If they had one Blonde Redhead CD, they endorsed the others ... implicitly. Her word!) She had nothing she could say to that, of course, except to reiterate that they have rules and I need to abide by them. But she was trailing off so badly, I could only tell it was because she didn't want to lose. Well, Goebbels, you did lose!

Notice how fast I wrote this. I'm always like that when some farking, better-than-you authority jumps on my ass about something. I'm shaking. I'm so farking pissed about this. Which is what the library does to people. They've pulled a few things like this with me. They still have this one slug working here who denied me the ability to read the Des Moines Register one time because that particular copy wasn't properly checked out. It was just setting there on the table. Seriously, that really happened.

When I complained, they told me the Des Moines Register is always "walking out by itself," meaning it's very prone to theft. They were accusing ME of being a thief. Just aching to get my grimy little hands on a hot copy of the Register! You know me: Instead of going over and stealing a $100 book off the shelf, I'm holding out for a $1 newspaper, one that's already rumpled and of next-to-no street value ... like I'm running a used newspaper racket ... selling them to desperate fishermen to wrap fish guts in. Or something.
Posted by dbkundalini at 2:10 PM