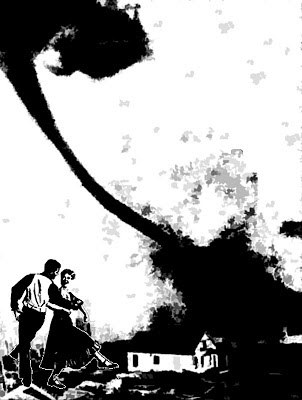 With everything we're facing from global warming, and our leaders having no political will to pull our ass out of the fire, we're going to have to try something to make it better. I know around here we're about frantic with all the tornado watches, warnings, and actual visitations -- HELL! ... Excuse me, there went another one, a full twister ... just carried away the neighbor's shed! If he sees me looking, I'll have to go help with cleanup, so I'm going to keep writing...

Anyway, I'm wracking my brain, and an idea comes to me, something I'm seriously going to try. I don't think it's been tried yet. If so, it hasn't done much good, so they must not be doing it right. That's dancing the tornadoes away. The idea just came to me, because there's some analogy there, a tornado is twisting the night away and that's what we do when we're dancing. It's fighting fire with fire; you've got a trouble, you combat it with the same trouble; a kid eats too much chocolate, you force feed him chocolate till it's running out his ears, he either quits, dies, or kills you.

Think about it: What if mankind stood up to these SOB tornadoes rather than running and hiding? You can't run from a bully. The bully will never let you live it down. He'll be on you everyday until you finally stand up. It reminds me of the story of "The Geese and the Poodle," one of my old stories. We had geese that let a poodle chase them, till they got tired. Then they flipped around and chased him, almost scaring him to death. He tucked his tail between his legs, or would've had it reached, and ran ... and he'd probably be running still, years later, if I hadn't let him in the house (1), and (2) if he hadn't died some months later from an unrelated car running over him in the drive.

So, what if we just stood up to the tornadoes and fought fire with fire! Meaning, we dance! We get all mankind, everyone in the state, out there when there's a tornado, morning, noon, and night, dancing up a storm! The jitterbug, the fox trot, even slow dancing. But you say the tornado, being an inanimate thing and not conscious, won't care. But maybe there is consciousness there. The yogis teach the same cosmic consciousness is in everything, so that could be our trump card. Our dancing and the consciousness in us, and the tornado and the consciousness in it, come together ... it's a beautiful thing. Beyond that, we have the pebbles in the pond theory, like in time travel movies, that every change in life, no matter how small, has unknown consequences. Running hasn't helped. We need a different pebble.

Holy crap! A tornado just went across the field on the other side of the road. It took out a cow. There go milk prices!

This might even become a moneymaker for me. Because until the idea catches on, I can hand out fliers and business cards (you can get 300 of them online for 10 bucks), and stand out in people's yards and dance the tornado away from their house. I'll do it myself and collect all the money. Or get a partner and cut him or her in for 30%, since it's my idea and I'm entitled to more. Most people don't get hit. So if a tornado doesn't show up 99% of the time, even if my idea lacks in basic science, it's still going to be apparently successful. Safe customers mean happy customers means big bucks!

Maybe the native peoples of the world knew this all along. They've been doing rain dances for centuries, and appeasing the gods by sacrificing virgins, the whole thing. My idea might not be that crazy.

Friends, I need to quit. Another tornado just touched down on the half acre, and I think the blackberry patch is gone. I saw some smaller thorns fly by the window. I need to get my boogie shoes on and find my groove thang. Someone's got to stop this SOB. That someone is me!
Posted by dbkundalini at 9:42 AM