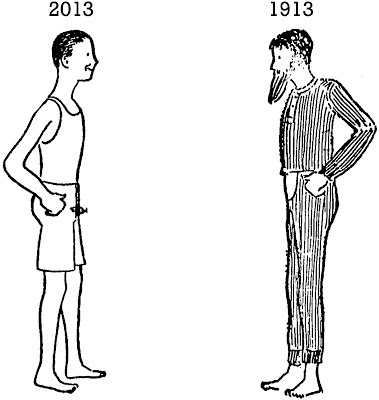 This has been a constant with me, ever since I saw the episode of "Bewitched" where Benjamin Franklin comes back from the past and is immediately driving a fire truck. Those from the past adhere to the things of their time only until they're brought to the future. It's something of a law, The Past Adherence/Present Forbearance Law, unless you can think of something snappier.

If we're debating, let's say, the relative merits of men's underwear from 1913 vs. 2013, were we to bring a guy here from 1913, he'd probably say the underwear of 2013 is better. And for another reason, simply because the average man from any time doesn't have any real reason to tout the underwear of his time particularly; he's not cheering for 1913, per se, but only looking for comfort, in addition, of course, to good value and other qualities.

But these debates come up anyway, because we really have this urge to compare ourselves to someone else and take sides, whether for our own self image, or, it's conceivable because someone actually believes there's merit in it. Like I said, I've always said I didn't want to get involved in such things, but -- forgive me -- this one is too interesting to simply let it go. I really would like to see a decent debate over the underwear of 2013 vs. that of 1913. And you know what, I truly believe 2013 would kick 1913's ass!

It's been a hundred years, folks, and the issue has dragged on for too many years: Is the men's underwear of 2013 truly superior to that of 1913? I'm going to say yes.

Just looking at the picture, the underwear of 1913 looks pretty tough, too tough for me. I'll give 1913 this, their underwear definitely looks durable. But who really wants that toughness? You'd be sleeping, if you were lucky enough to get to sleep, and you'd feel the toughness of that fabric. A gunny sack would be more comfortable. But the picture from 2013 shows a lighter fabric, something that breathes, something that goes with your body, not against it. It's definitely going to be more comfortable. We've made strides since those dark days when it comes to fabric. The pictures don't lie.

Another thing, going by the above presentation, the guy from 1913 himself looks like a tough old buzzard, whereas our 2013 contemporary looks cool, calm, and collected. It's something about the underwear -- Mr. 1913 turned into some kind of mountain man/hermit, with no access to a razor, with it having something to do with the underwear. Maybe he didn't want anyone to see that weird codpiece on him.

OK, I'm getting too negative. Instead, I want to focus on the qualities of 2013's underwear, and that will keep things more positive. First, I like the way the straps on the shoulders are so delicate, fitting like a dream. But look at our friend from 1913, it's definitely a tight fit at the neck; he's going to be itching all night. Then there's the legs. 2013 has shorts, much more comfortable, unless it's winter, in which case 1913 has the upper hand, not forgetting for a second the lack of comfort in the fabric.

Finally, notice that 2013 has a smile on his face. But 1913 is looking somewhat more dour, even perplexed at what's happening: Have I somehow traveled into the future and met a man who's going to taunt me for my old fashioned underwear? I'm buttoned up tight, but look at him, loose as a goose. Were we to strip down to our bare nubbins, he'd beat me in a heartbeat. He'd be nude in a jiffy while I was still fidgeting with my neck piece. Then he'd be under the covers just that quick, that nubile 100-year-younger flesh pressed against the satin sheets, waiting for me, an older and more experienced man to crawl in with him. Imagine that, a guilt-free roll in the hay, since I'm from 100 years in the past and no one knows me. I could be Rip Van Winkle for all this guy knows. And they're not expecting me back in 1913. I think I'll go for it. And maybe he'll turn me on to some halfway decent underwear when it's all over. Then next week I'll have a job driving a modern fire truck, putting out other fires. Hey, baby boy, come to Poppa...
Posted by dbkundalini at 5:05 PM