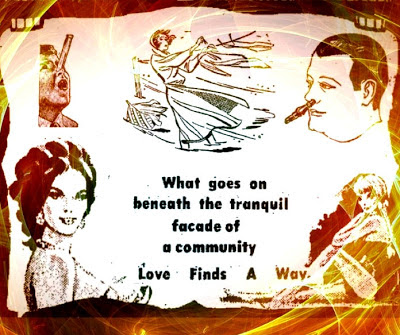 If you've ever been in the grip of an oppressive fetish, then you'll understand very well this little post. Of course fetishes come and go. Just like you never see the same river twice, so your mentality changes all the time; what's important today won't be important tomorrow ... usually.

Then there's the guy with the clothespin fetish, that hung around forever. We'll call him Walt. Of Walt we'd have to say his mentality had a remarkable stability. Which is hard to relate to, as you know. For any one of us, it might come and go, but not him. For him, he picked it up as a child, one of his Mommy Issues, since she always hung the clothes outside. He'd be right there at her side. She'd put clothespins on his shirt, and even in his hair, then reach over and get one when needed, calling him "my little helper."

So you can see the root of it. Insidious. Years later, on his own, was when it all came to bloom. He thought, all quite innocently, he could hang up a few clothes over the bathtub. (He lived in a place without a backyard. Like most people, he was urbanized, with yards being a thing of the past.) That first bag of clothespins was all it took!

Next thing -- which is how these things go -- he was carrying a clothespin like a good luck charm. Then more pins, for various and sundry reasons: To hold up his pants, to keep his hair in place, to keep his earlobes warm, etc. There were plenty of practical reasons, too: To keep his keys on, to hang toast while buttering the second slice, to store bills in, and as a substitute for staples. Then there were the kinkier, more socially repugnant uses: The pain and pleasure they can give when clamped down on personal parts, especially when multiplied up into the hundreds. Imagine that, hundreds of clothespins clamped on you!

I can still picture a photo he took and sexted to 300 ladies in our town. I saw it because everyone knows at least one of the 300 ladies. It was like a perfect mandala down there, the circles radiating out from the center as perfect as the form of the human body can allow, also taking into account the lack of direct sight for the person putting the pins in place. The blood in Walt's body was obviously in some confusion, risen up in bright red spots in some places, then being completely pinched white in others. As a guy, I have to say this was clearly painful. But pain or no-pain wasn't his concern in that weird ecstasy.

Of course Walt got in trouble for this incident. Because that was all him sticking up in the middle. He had to do community service and not be found within 200 feet of a clothesline. Plus, he had to go in for counseling, which, as we all know, wasn't likely to do a bit of good. You don't get away from being Mommy's little helper that easily! But nothing against counselors; they have to eat, too, no problem.

Well, you can probably guess what happened. And that's all this is, guesswork. Because we don't know for sure what happened behind closed doors. But if you're guessing he had clothespins all over himself in the house, then we're on the same wavelength, you and I. And if you can easily picture this incredible array of clothespins all over him leading to ecstasy on his part, then the ecstatic conclusion leading him to a weird mix of bliss and self-recriminations, then we would also be in agreement. And, finally, if you can imagine a guy taking thousands of clothespins to the curb for the garbage man, then going out about five minutes before they'd come to retrieve them, and then going to the Dollar Store later that same morning to buy out all the clothespins they had, then you're something like me in picturing it. Meaning, you and I know the ways of human nature to a T, but being strict amateurs we haven't yet earned our first dollar and aren't likely to. Even though we, like the counselor, also need to eat.

So whatever happened to Walt? He's still around. Like anyone, oblivious to help. I saw him at Walmart the other day. He had clothespins hooked all over his shirt and a few attached to his hair like dreadlocks. What was going on under his clothes, I'm afraid I don't know the answer to that. Although, I'm guessing, had I gone up and asked him like you might ask any other guy, "How're they hangin'?" he probably would've taken it two different ways.
Posted by dbkundalini at 4:51 PM