They Drove For The Love Of Trucking 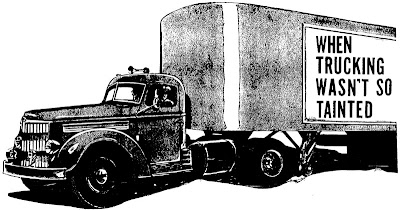 I've been cooped up at home for a long time, seriously, and I forget sometimes what's going on in the world and the things I don't like. Like the issues I have with modern trucking. I guess I'm like anyone else: out of sight, out of mind. And to think the interstate goes by just south of my house, within a couple miles. But it's not loud, you can barely hear it from that distance. So I forget, leading me, after six months or even a year, to travel, so I can be reminded.

OK, so I'm out there yesterday, taking that interstate, then switching over to another one, like that all day, going from Point A to Point B, like a lot of people in cars on the road do, and I'm getting a serious reeducation into the ways of the world. The farther I go, the more the memories come rushing back. And I feel all the emotions you would expect, especially my sense of building rage, due mostly to three things: 1) Incessant roadwork; 2) Too much congestion; and, 3) Trucking for money.

I'll bet I saw 40 trucks with signs on the back, displayed there for any potential truck drivers who might be easily lured, of companies begging guys to drive for them! A few of them were honorable: "If you've ever had the dream to drive truck, please fulfill it ASAP by calling our career hotline," etc. That's not so bad. A few were less honorable: "If you're looking for an over-the-road career that will help you keep the peace at home by not being there, please call..." Not as good. But most of them were downright despicable: "$$$ We pay top dollar for drivers, earn big, huge, enormous $$$ driving for us!" And naturally they had a phone number, luring whatever poor sap's sorry enough to call.

I'm just going to say it: That made my blood boil. Although, shaking my head, I kept it all in context -- that's the way the world is, that's the way it's gone. The Almighty Dollar! Everything is just naturally reduced these days to a financial goal, the vision of dollar signs dancing in your head, as the be-all and end-all of our existence. You wake up dreaming what you're going to make and it's the last thing you think of at night. Continually calculating. It's very easy to picture what the poor truck driver's doing as he's driving down the road, scratching out on a notepad the hours and miles he's driven times the cents he's getting for each mile. Money, money, money!

So what have we lost? So much... I'm not the oldest guy in the world -- I'm 60, OK? -- but I remember clearly when truck driving was a vocation, even a craft. A young man wanted to drive truck simply to drive truck, for the love of trucking. Money wasn't his big interest. And the truck lines we had back then, it's worlds apart from now. They weren't tainted by money. It wasn't their consuming interest. They just liked the idea of getting cargo in their trucks, packed in there all good and snug, and taking it down the road, sometimes just for the heck of it!

This is serious stuff. A guy I used to know had his regular job and that's where he got his money. Then he saved up for a nice truck and simply took it on the road, hauling stuff because that's what trucks are for. If you bought him as much as a sandwich, he'd be offended. And I couldn't swear to it, but I'd bet he came darned close to the coveted Million Mile Club, because I know he racked up big miles ... doing it in an honorable way, insisting on it as more of a craft than just any other money-grubbing job.

And coincidentally -- or maybe not -- that was back when a trucker would pull the horn for kids passing by. Remember that? Because he was just another guy, not this money-hungering hack, so busy figuring up his next month's check that he doesn't have the time for another human being, a kid. It was Man and Machine, Machine and Man, together in a beautiful synergy that showed off the best of each, and yet both were somehow One. I know I really took those days for granted, and now they're gone...

Maybe old men like me aren't meant to travel the highways anymore. The good old world as it once was has passed us by. Companies are manned by computers, set to melt down to liquid ore if the bottom line fails to increase by the minute. And those living beings who tend their electronic masters are so jaded, if you were to meet one on the street, you'd walk away depressed by the encounter. That guy's eyes were like sharks'. And then the drivers themselves, they'd run you over if it meant another dime. They're in a strange haze, popping pills and blinking at the bright sunlight, drifting from lane to lane from the constant vertigo.
Posted by dbkundalini at 6:20 AM