The Chilling Hand of Death 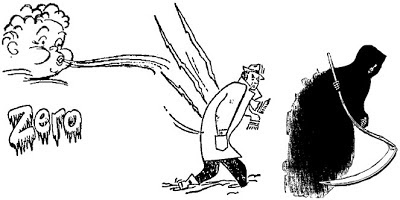 I hadn't been with my new best friend, Death, for well over a week. I was halfway relieved, and halfway afraid, too, for the separation. Afraid, because I don't know that many celebrities, and when you get to know one, something of their effulgence wears off on you even if you're not trying. I saw Ed Begley, Jr. in an airport once, so I know what I'm talking about.

I didn't see Death because I was out of town, so I wasn't available. And apparently everyone survived where I was. Then when I got back, he dropped by, telling me he had some local runs to make and asking if I wanted to tag along. I was all like, "How many times can I be found at the scene of multiple deaths without the cops thinking I'm involved, even if I'm not?" He gave a wink and said, "Don't worry." I took that in the obvious way: If a potential crime doesn't involve issuing speeding tickets, it's way down the list.

Before we left, I had the thought, It's a little cold, not freezing but not comfortable. So I packed a few things and we hit the road, me driving, with his black mist hovering over the road in front of me. Thankfully, he stopped at lights, a nod to my obsession with public safety and laws.

Finally, we found our way to the seedy part of town, one of the seedy parts, and a gang of psychos had taken the field in one of their endless turf wars. I was comfortable in a regular dress shirt, but when Death hovered up over the field, and the truncheons were flying and several gang members lay dead, I felt a slight chill. I put on a sweater and a light jacket.

I asked Death where to next. He whispered, "There's a cop killer on the loose." I thought, Good God, I can't have prior knowledge of this and do nothing. But since nothing had yet happened, and I didn't know the particulars, what could I do? I followed Death, then parked some distance from the scene of the crime, when, Here came a car squealing around the corner, an obvious speeder being pursued by a cop! He was shooting for the wheels but hit the driver in the head.

The car swerved out of control and flipped and took out some guy's white picket fence. The other perp was out and in a gun battle with the cop, managing by some lucky shot to hit him right between the eyes. I raced to the scene and saw it was too late; the officer was bled dry. I made a mental note: Life is tough. Then as I ran I felt a chill and put on a heavier jacket.

Next, we were on the scene at a fancy hotel. Lucky floor 13, as it turned out. A businessman was at his desk, ruling proudly over his vast domain, that office, and berating his son for being a good for nothing shiftless wastrel. The son addressed him in a respectful way: "Father, I'm sorry life has come to this, me being such a monumental disappointment to both Mother and you." It was all very melodramatic, as Dad waved off the son's apology but refused to embrace him and weep over him.

In my opinion, he should have cried out, "My son, I love you with an unending love. You are the joy of my life." Instead, he smacked his own head and hissed, "Plus you're dumb as a sack of hammers," at which point the hammer clicked on the son's gun, a stubby little thing, perhaps sawed off, and he became a suicide all over the office. I glanced up and saw red splatter on the mirror, causing me such a chill that I simply had to put on a heavier coat.

Last, and this was the worst one of all for me, we were in the hospital room of a lady, older but not completely old, dying of cancer. Some family was milling around in the hall, a daughter was swabbing the woman's lips with a little pink sponge, and their minister was sitting in the corner, examining his fingernails and wringing his hands.

Death and I, both in mist form, were in the corner. I was a little nervous, not so much for the family but for myself; my mist was a little too close to the sharps disposal bin and I started worrying that some might get in it, then when I rematerialized I might have a used syringe or razor blade in my spleen.

Death kept checking his watch, until the appointed time came. He hovered over and enclosed the woman, who breathed her last. The monitor went flat and everyone could hear a sustained beep. The family came running in, the daughter with the swab stopped in a hush, a nurse checked her watch and pronounced the exact time aloud and clearly, and the minister saw an opening and opened his book. It was such an awesome moment that I felt the world's worst chill hit me, the world's worst. Quickly, I drifted back down the hall and put on my coveralls and heaviest coat.

Death caught up with me. We made a beeline for the car, as quick as I could with so many sweaters, jackets, and coats weighing me down, not to mention the coveralls. He was ready to roll but I said, "No!" I've also been having trouble keeping my feet warm, so I had to change my socks right then and there ... or I'd never make it.

Dead Links:
Death -- I Now Pronounce You Dead
Out Drinking with Death
Death Goes to the Dentist with Me
Death -- When Your Number's Up
Walt's Suicide -- Death by Water
The Gaping Maw of Death (Woof! Woof!) My Picnic With Death
Posted by dbkundalini at 6:08 PM