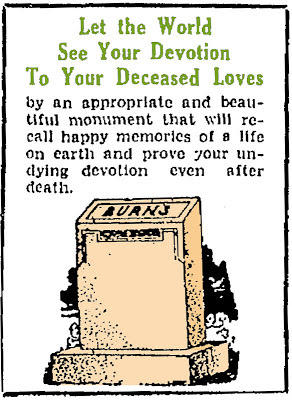 Our condolences to the Burns family.
We know the summer of 1893 was a very tough time for you.

Memorial Day has to be one of the greatest holidays. It speaks to us of the weird rhythm of life: One minute you're here, the next you're gone. I know I've thought of this rhythm even since I was a kid, playing dead under my sheets. Our deceased loves seemed fine the last time we saw them, then the news came they were gone. We shook a vain fist at Heaven, but it was all so inscrutable, not a single word of response.

Of course, nothing has changed. So what can we do? There's not much we can do, but give them a Memorial Day they'd be proud of. And if we do, maybe there will be that much more chance somebody someday will do the same for us.

It's grim, death being no respecter of persons. I personally know my relatives were saints, every one of them, and yet this had to go and happen. There ought to be some benefit for doing so much good ... not that they'd ever expect it, that's how good they were. Whole cloth.

But no, Death is a reality for everyone -- the conqueror worm and all that -- the one great fact of life. We're here, we're gone, just like that. It's enough sorrow to drive us crazy. So thank goodness for Memorial Day, standing as it does as a little island of remembrance, a place between life and death ... even though it does cause me to get a little misty in the eyes. And morbid. I think curious thoughts, about how they look now, after all these years. Clothes rotting away, by now fingernails a mile long.

I've got quite a few deceased loves, so I generally make the long, tiring trek, traipsing out to the various cemeteries. Years ago, somebody in the family should've organized things so everyone would've been buried in one mass grave. It'd be a lot more convenient for me, but they did what they did. The worst thing about it is fighting the crowds on those narrow little cemetery roads, which weren't made for two way traffic. Horse and buggy days.

The biggest thing I hate about the crowds, besides the traffic, is seeing their disgusting plastic flower arrangements and other crap. Dime store windmills, styrofoam crosses. You think you're honoring someone with that stuff? Yeah, the stockholders of Tacky Industries, probably churning it out in Asian sweatshops with people paid a dime a year and no benefits, and locked in the factories besides. Give me good old fashioned real flowers, and crosses of genuine wood, and decent durable windmills that a ghost kid can play with for eternity.

I know I'm on my soapbox, don't get me started. But while I have the floor, let me rail against one other thing: The terrible "gravestones" (not even that) these cheapskate families have for their deceased loves. Now I'm started, I may as well finish! It's scandalous the number of temporary markers originally put up by the funeral home 30 years ago that are still there. I don't know what happened exactly. Maybe they went to Vegas and blew all the insurance money. Or maybe ... and I hate to judge ... their love for the deceased wasn't all it should be. That's not undying devotion, that's slovenliness, which I think is one of the Seven Fatal Sins, Seven Major Sins, or Seven Unforgivable Sins, whatever it's called. But ... anything! If you saved only $100 a year for 30 years, you'd still have $3,000 for a halfway small monument, which would be better than nothing. Those are the people I can't stand.

I'm proud to say, all my deceased loves have memorials erected. And I personally really didn't do much to make it happen. When they first gave up the ghost, those who were on the scene did what was necessary to make it happen, skipped meals, whatever. Then they died, and others died, and there's still a few left besides me. Hopefully, when I finally kick off, there'll be someone left to put up a modest 10 foot stone. I prefer they be bold. Tell the funeral director right to his face, we're going to be ordering a stone, so be in your office Monday morning bright and early. Go down to the quarry and get something good!

On a serious note, this Memorial Day, we as a nation have a lot of extra dead to be grieving over, of course. Just like every year, there's always some tragedy that hits the news, and strikes a cord with us, be it a mass murder, a natural disaster, or a plane wreck. It's especially bad if it happens all at once. We might have 300,000 people die one at a time, and no one cares, but you get 40 or 50 at once and it really hits home. 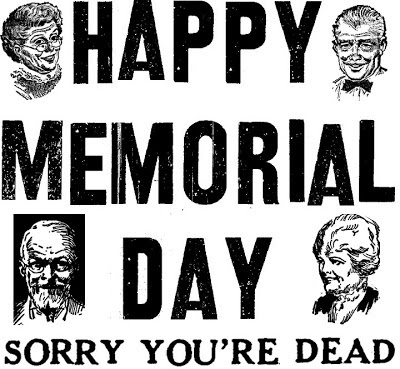 Posted by dbkundalini at 6:58 PM