Defeating Self-Defeat, Then Defeating It Some More 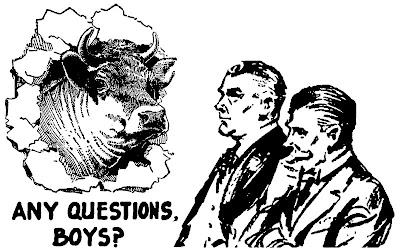 I personally need to remember the lesson of the bull in the china shop. Whatever problems he may have, he left them at the barn. His memory of problems is negligible anyway. He's certainly not dwelling on them. And now, somehow, life and circumstances have brought him to a china shop. No time to sit and stew.

The door's open, he wanders in. Then everything goes crazy. The owner of the shop throws up his hands and shrieks, the bull is confused but still a strong presence, and in a moment, he's thrashing about, not remembering the door. He destroys a ton of china, he topples and shatters glass cases and fancy racks, and it's a complete disaster. Then one last bit of craziness finds him charging a wall and coming through the other side.

The lesson, at least for me, is to learn to contextualize your problems, rise above them, and charge on on your merry way. Do your best to defeat self-defeat, then defeat it some more, just for good measure.

It's been one of those weeks. Just like the book of Job, only there's no one escaping and showing up at my door with the bad news. Everyone is consumed, there's no one left. But thanks to the miracle of phones, messages, Facebook, and other communications, I hear reports from the front. Involving this, that, and the other loved one. And involving me, suddenly given to lots of traveling, extra work, and vast financial outlays.

It's times like this that I'd love to go dormant, to hibernate somewhere, in a pest-free, climate-controlled cave. Let's picture it. Like the pictures of Jesus' tomb, utterly neat, a centralized rock slab with a firm mattress on it. Some baffling on the wall to keep down noise. Some of Kafka's doormen outside to keep visitors away. No TV. Maybe an iPod. A little family of mute fairies to freshen me up and the place, then vanish. Patchouli scent, not overpowering, just right. And if the outside world needs anything, it goes dormant, too, till I wake up and finally venture forth refreshed.

But since none of that happens -- mute fairies are a bastard to find -- the next best thing is to get a rock-solid attitude, and not let anything get you down for long. The real problem, simply put, isn't any one of the challenges, but self-defeat. Looking at life all wrong. And as said above, failing to contextualize.

Life is suffering. But there's ways to rise above it. Actually, just knowing that much is the insight, like Buddha. But I'm like most people, needing practical steps. A key step is to know that self-defeat causes more problems, adds to the burden. You're only making it worse. But the bull isn't worried that a couple of the herd are sick or dying. He's not mourning his old calves' problems. He's thrashing about in whatever weird joy that is.

Or, you can realize that if you were happy before, then at some level you're still happy now. The world had a trillion problems before -- what's a few more? Or, to really contextualize it, your little moment of life is just a flash anyway. It didn't bother you when asteroids were hitting everywhere and killing the dinosaurs. The World Wars didn't bother you. And it's not going to bother you, someday, when the world's being burnt to a crisp by a red giant sun. So you have a few dinky problems today! Who doesn't?

I feel that old bull strength coming back. Don't let your psychological head muscles flaccidify. (Spell check says that ain't a word.) Don't let your brain atrophy. Get up and get back at 'em! Self-defeat: Just another word for an interstate rest stop without facilities, mostly a worthless interruption in the overall trip.
Posted by dbkundalini at 10:47 AM