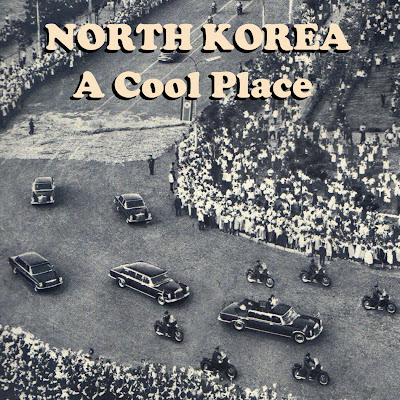 I know I'm risking whatever security clearance I have, may have, or may not have, by writing this. But other considerations override my personal fate, the fact that I am of the opinion that North Korea is a cool place. I know, I know, it's not popular these days to stand up and be counted.

It all started -- I'm guessing here -- three or four years ago. A guy I met at the library was acting a little furtive with his reading material, like he didn't want me to see it. But I prodded and pried, and next thing, he was showing me some literature he had from the Democratic People's Republic of Korea, North Korea.

I looked at it with some suspicion, but he gave me the "shush" sign and assured me he possessed it legally, then he went on to tell me how cool it was. I thought, "Hmm," overcoming my inbred suspicions and turning the pages of the magazine, "This actually is kind of cool. I love the whole vibe." He smiled and nodded. After that, I guess you could say we became a club of two!

Now it's been, like I said, years, and we still have only that one magazine, dated 1975. I asked him if there's anything newer, and he said, No, that's what we've got so far. He thought back and said he'd gotten it fresh when he first shared it with me, that it'd just come in by ship and that that's all we needed for the time being. OK. And something about the printing presses needing parts from Cuba.

But the key thing is not its age, but the content, which we have to assume is still just as relevant today as it was in 1975. I've often heard that North Korea doesn't change that much, that they've been able to maintain a sort of constant stability, whereas we in the West have had tumultuous changes. What's better? The contentment of stability or the upheaval of change? I don't think I have to answer that...

This particular issue shows their great president, Kim Il Sung, traveling the world, as a goodwill ambassador for everyone. And meeting with various world leaders that I can only presume are still in power, heroes of the cause, Comrade Nicolae Ceausescu of Romania and President Josip Broz Tito of Yugoslavia. I seriously thought Tito was dead, or had joined the Jackson 5 or something; I honestly haven't kept track. But there he is, as of 1975, still very much alive!

But the article that really caught my attention is their call to Americans to defect, to "Join our unremitting struggle for the victory of the cause of people and democracy." That sounds cool! Really, why do we want to follow the lackeys over here who simply prattle out the things they want us to hear, all the while pulling the strings of repressive imperialism both at home and abroad? The key thing for my purposes is: The trip there is all expenses paid, and they have employment for you. The listings are mostly for field labor, but there's also a tractor factory looking for skilled workers.

I know I'm getting myself in deep here. But -- be bold! -- there's no turning back now. The magazine sketches out the steps: 1) Contact the State Department; 2) Go to the State Department; 3) Renounce Citizenship; 4) Complete Paperwork; 5) Enter Renunciation Room for Formal Swearing Out; 6) Go to North Korean Embassy for Hero's Welcome; 7) Live Happily Ever After in Great Struggle.

That is one cool photo I've got! Six motorcycles for every car.
Posted by dbkundalini at 7:24 AM