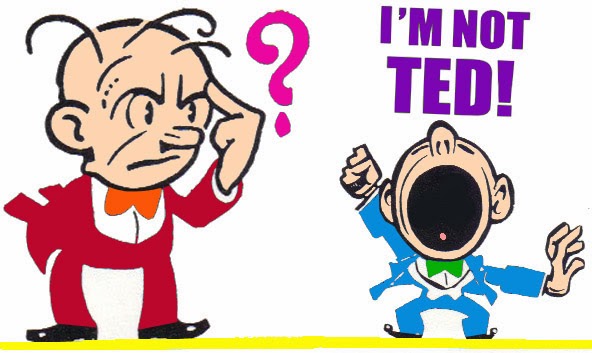 This was something I had long contemplated. They said there was a kid out there needing to be supported. Being myself a well-respected man, I presented myself available to help.

They told me my mentee was 13 years old and named Ted. I greeted him, "Hello, Ted." I was glad that I'd been invited for this. Some of these kids, it's like they're dilapidated people; they've been isolated from good company so long, they're goners. So anything we can do that they might be rehabilitated is always appreciated.

But my pleasant reverie was interrupted and melted away when he blurted out, "I'm not Ted!" I checked the paperwork and, no matter how such things are accounted for, this had to be Ted.

With a gentle, contented look and friendly lifted hand, I prevented him from storming out, letting him know I really wanted him to stay. I thought, "Poor kid must have been booted from place to place, or maybe taunted over something." Soon, he rested his twisted features.

It was obvious that this was a kid who called for a moderated attitude from me. But I started to take it for granted that no one alive could be delighted to be around him very long. I fretted that I wouldn't be able to do it, already feeling tormented.

But as indicated by the situation, I resorted back to total calm, and once again had corrected my attitude. I wasted no time, "Tell me, what are some of the things you've celebrated in your life, a life really only just started? You seem like such a spirited boy."

All at once his face contorted, and I heard a strangulated voice, which imparted and repeated what he had already asserted, "I'm not Ted!"

I'm sure I must have looked agitated, and maybe disgusted. Had I said "Ted"? No, I explicitly resisted having said his name, until such a time when I would have seen more evidence and reflected on it. "Dimwitted boy!" I thought, "What are you, demented? Maybe you belong in a gated community, the kind that has twisted barbed wire on the fence!"

Again, it was up to me to think, "This boy must be tolerated." I catapulted my anger and quickly concocted a line: I attributed the misunderstanding to myself and said I stood corrected. I'd never before tasted this kind of nonsense, but I wanted to give him another chance, so I attempted to engage him again, despite being exhausted. "Why don't you tell me what you expected when I was invited to get together with you?" His features were again distorted. It was easy to see his perfected ire had again routed itself straight to the surface. "I'm not Ted!"

I was nauseated, and simply said, "Ted -- or whatever other blasted name you were fated to bear -- you seem to think I'm obligated to help you, when in return you've resisted everything I might have given. This cannot be tolerated! You have now grated on my last nerve!"

I shouldn't have even started with a kid like this. If only I had resisted! I gesticulated and ranted on: "I hope you'll finally be contented when you look back and see that you've been deserted by your very last friend!"

The little monster mounted up from his chair as though escorted by the Furies themselves. I could see he hated my guts, and his voice reverberated in the room and down the hall as he spouted forth: "My name isn't Ted! It's Theodore!"
Posted by dbkundalini at 7:43 AM