Why Aren't There More Natural Disasters? 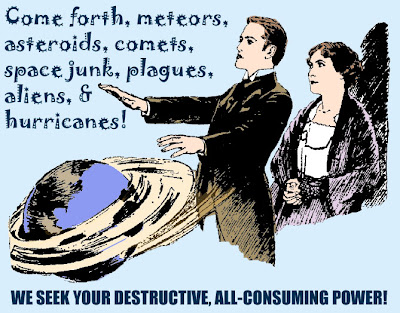 We have a few tornadoes, hurricanes, earthquakes, tsunamis, forest fires, and volcanoes and we think we have it so bad. Or an occasional asteroid comes within 2 million miles of us and we're concerned. How about crying me a river; that'd be a disaster!

I think we have it pretty good. It could be much worse. I watch some of the science shows and they say we're in the "Goldilocks" area of space -- where it's "just right" -- although I saw something by a guy the other day that disputed that. He had stubbed his toe getting out of the bathtub, probably.

The fact is, so far, the Earth's had it cream puff easy. Somehow, even when an asteroid did hit the planet, it made it better, clearing out the dinosaurs so we could evolve in relative peace. As much as I like watching dinosaurs on TV, the idea of one crunching my body the first thing in the morning is unappealing. Look at my scrawny little physique ... How desperate could a dinosaur be?

All we have to do is compare the Earth to other planets to see we have it good. There are storms on Jupiter that last thousands of years. Imagine that. The nightly news, "The storm continues yet another day." There's planets that have no atmosphere but pure methane. We catch one whiff of methane on Earth and we think we have it bad. There's planets where the oceans are 5,000 miles deep. I can't picture that. If the Titanic sank, that's the last we'd see of it. Saturn pulls on its moons so forcefully, they're literally reshaped everyday. Is your yard in a different place everyday?

As far as I'm concerned, all this is good and proper, especially since we can't do anything about it anyway. But were we there, it'd be bad. We can literally thank our lucky stars that Oklahoma only gets wiped out by tornadoes three or four times a year. Because comparatively, that's nothing. The only thing we want to avoid is messing up the balance and making things worse. We can do something about that.

Then there's hurricanes. They come around at a particular time of year, when the air and water temp are just so, along with the spinning of the Earth, and, according to the crazies, whatever God's mad about. It's funny that God's supposed anger happens at a particular season of the year that can be explained by natural forces. But there's no disputing them. According to Pat Robertson and others, God might be mad about a gay pride parade in Louisiana, therefore this perfectly natural force partially destroys a city.

But assuming that's so, what about all the planets -- out of hundreds of billions, there have to be a few -- where it's hurricanes all day everyday? And no one lives there, except maybe one lone weatherman crying in the tumult. The truth is: Since there's only 26 hurricanes possible on Earth a year, so we don't run out of alphabet to name them, God can't be that mad. The whole theory is crap.

The same thing goes for plagues, diseases, infections, and sitcoms. At times, we're besieged by them, but in the whole context of things, it's nothing. We enjoy a certain balance of what seems good and what seems bad. I personally hate mosquitoes, but in the whole scheme of things, they're food for something else. So who am I to complain? I'm outside five minutes a day, try to bite me ... If you must.
Posted by dbkundalini at 10:04 AM

...And if it were not for disasters we would not have all those wonderful disaster and post-apocalyptic movies. There would be avoid in our lives unfulfilled. Thank you for your blog making....I am enjoying you humour. ~Rainy