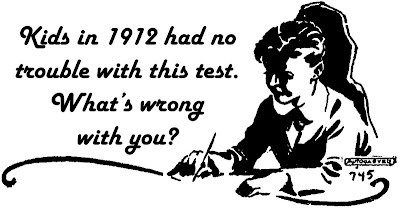 The kids of 1912 were recently in the news, for a test they had to take in those thrilling days of yesteryear, and presumably most of them were able to pass. I honestly can't say much about the actual test. I took one glance at it -- all my attention span could handle -- and knew it was beyond me. Of course, I'm ashamed, but at least I was smart enough to know I couldn't do it. That being the one thing I'm always good at.

I see all kinds of things I can't do. My expertise is lacking in certain key metrics. Is that how you say that? I'm not great with reading, 'riting, and 'rithmetic. You can see my spelling's completely off right there. And when it comes to 'rithmetic's grown-up brother, 'athematics, I'm 'atrocious. I seriously wouldn't be able to fight my way out of a 'athematical brown paper bag. I might be able to handle a cardboard box, since the volume and dimensions are easier to figure with straight lines.

I've always been lackin' in book larnin'. It's just that I always had other things to do. I believed kids ought to be out in nature playing, so that's what I did. I ran away from home early, lived in a jungle, became the king of the apes, and swung from vines. I talked with the only words I knew, "Me dumb, you smart." After that, I had a school teacher who came from the city to teach me the basics, which started out as pure academics, but slowly degenerated into biology.

But enough about me. What about the kids of 1912? They were people like you and me. Like you, let's say. They could do the basics things of life with no problem. They had their setting, their opportunities, the various expectations of society for them. If society expected them to learn X, Y, and Z -- the three last letters of the alphabet -- they managed to do it. Or if they thought it was important to memorize a list, like the state capitals or Klingon vocabulary, they could do it.

Kids today aren't necessarily dumber. It's just they seem dumber, since they haven't gone through the same grueling process of the memorization of facts. The only grueling experience they've had is with the gruel the school serves up for lunch. And that, they've had plenty of. But education itself has changed, making it more a matter of preparing for a future of limited possibilities and unlimited anxiety. The kids of 1912 were blissfully ignorant of this future, seeing the future in optimistic terms. It's definitely easier to memorize the capital city of some Mideast capital if you don't associate it with being beheaded when you get there.

If you're 12 in 1912 and live till 2012, what does that make you?
a) Centenarian
b) Humanitarian
c) Vegetarian
d) A drag on society, endlessly sucking the teat of Social Security, bankrupting the world. Die already!

A catchphrase of the future will be:
a) 23 skidoo
b) Bee's knees
c) Razz-ma-tazz
d) I got yer daddy right here
e) All of the above

Your future is bright, including:
a) Full employment
b) World peace
c) Health and happiness
d) The Great Depression and 2 World Wars
e) All except D.