The Many Awards I've Received

When I started my blog -- Grandma Slump -- a little over five years ago, it was the furthest thing from my mind that I would go on both to present and receive so many awards. But my efforts, if I may be permitted to step out of the bounds of modesty for just a second, turned out to be good. Hence, the commendations.

Of course I'm not sitting or resting on my laurels, as comforting as they are to body and soul, and which would in other circumstances lead to sitting and resting. Because, I don't know ... I guess I'm shooting for more! I guess I'll keep going to the well 'til the well runs dry! I hate to jump ship before I get where I'm going. That wouldn't make any sense.

But for today -- today only -- I thought I'd just take it easy ... lounge here in my trophy room ... and maybe let you take it in, some of the various citations for blogging I've gotten. In presenting myself with these awards over the years,  naturally I've been humbled. But along with humility goes a certain satisfaction, falling just short of hurtful pride, knowing that you all have been touched in some little way.

I have the ribbons you see above, two outright blues for first place in a couple of divisions. I have all the paperwork somewhere, telling which blog posts these ribbons were for. But to go get it is too much work on this restful day. It's sufficient to show that I did get two blue ribbons. Then -- and I don't know what happened, something bad -- I got a red for second and a green for third. I hate second and third. If I had a whole box of second- and third-place ribbons, I'd use them to patch clothes. It's only first that I like. So you can see, I traded in those two ribbons -- losing one ribbon in the process -- and got a third blue. 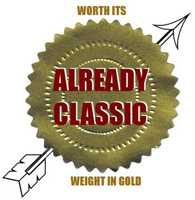 Quite a number of my posts have been granted the normally-rare designation of "Already Classic." These are given almost instantly, for a particular excellence that doesn't need age to recognize. In fact, it wouldn't make any sense to wait, because then they'd be merely "Classic," whereas "Already Classic" denotes jumping the gun, as it were.

I've been getting these awards steadily over the years. So many, in fact, that I think it might need to be snazzed up a bit, since, while I appreciate the honor, I'm getting a little tired looking at it. Maybe it's something to do with the arrow. It seems to be at distinct variance with the gold seal and lavish red title of the award.

People always say I'm one of the friendliest bloggers they've ever met. I appreciate that so much, although I would question the phrase "one of the." The trophies don't lie. I don't just have one Friendship trophy. I have six. I'm pretty sure that's a record.

I just like winning them, I guess, so I'm as friendly as I can be. Someone praises me, I smile. Someone criticizes me, I keep smiling, even if it's tougher. I just figure, I'm friendly enough to stand there and take it. There's no payoff for erupting, especially if I've already been friendly. That would only take away the investment I'd already made in being friendly. I can always kick a box around the yard when I get home.

You see the face of James Taylor, who sang one of my favorite songs, "You Got a Friend." I tried to play that on guitar a few times. It has some unusual chords, making it tougher to do, but with a little work, it can be done.

The Strongman trophies, I received those for denying myself a few times along the way, doing anything I had to do to get the blog out regularly. Like anyone, I need a certain amount of sleep each day. But I also have a very severe responsibility gene. If something needs to be done, some goal needs to be met, I stay up and stay late to get it done.

There have been times I've even denied myself meals and going out with friends. They've acted like they didn't understand, but at some level I believe they did. After all, their going out was so important to them. And I didn't see them denying themselves that pleasure. The best way to summarize: I've gotten several Strongmans and they haven't. 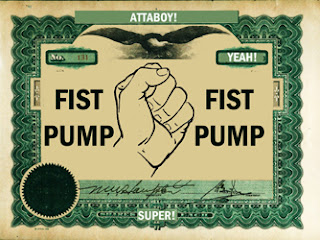 A Fist Pump certificate is given for any little thing. It accompanies smaller encouragement awards, like a mug with a bag of M & Ms in them, smaller denomination gift cards, and little laminated wallet cards with encouraging sayings. I've got some of them set out here. Five "Attaboy" mugs, with the M & Ms now gone. Three "I Can Do It" certificates. Six "10 shopping spree" gift cards, also now used. And three laminated "You're Super, I Appreciate You More Than Words Can Say" wallet cards. 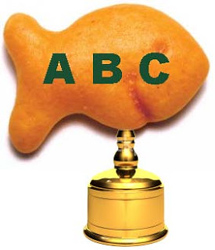 One other trophy I've been proud of is this fish one. It was 2010, and a combination of factors all came together. It was like catching lightning in a bottle. It was for my series on industrialism -- 200 hard-hitting -- both indicting and commending -- posts on industrialism.

No one else would touch the topic, let alone do with it what I was doing, which was, as I said, 200 consecutive -- not hit and miss, but consecutive -- posts on industrialism.

For that labor, I received the prestigious Gorton Fisherman Award for Writing Excellence for 2010.
Posted by dbkundalini at 6:35 AM