The Ghost of Old Man Harris 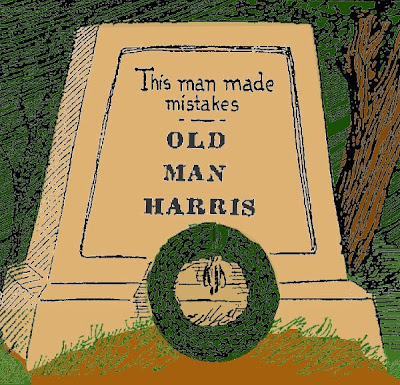 When you get old like me, if you're not careful, you'll find yourself dwelling on the past. It's different than when you're 20, since now there's so much more of it. As for me, I try to dwell on the good ... but of course there's also the bad.

I shook it off, but there in my mind was the image of my worst school principal, Old Man Harris. I think scourge would be a neutral enough term for him, but bane, terror, plague, they're all good. I told all this to a neighbor -- Deanna -- and she said, "Being angry at things and people in the past seems a waste of time."

That sounded reasonable. So I went on with my day, until the old demons again rose to the surface. I googled Old Man Harris and got 14 million hits. It seemed everyone in town remembered him! But now he'd passed on. I kept checking, and Google Cemetery View showed me right where he was. I had an idea.

I also googled what you should say to the dead who've aggrieved you. Most of it was very extreme: "You dirty so and so," "You worthless bag of so and so," and so on. But Deanna's voice rang in my ears, "Being angry ... seems a waste of time." True, true, I said, what good would it do?

Regardless, the more I thought of it, the more I needed to resolve it. Yes, he's been dead 35 years, but he must finally get his. I got to the cemetery and looked around. Hmm, there seemed to be a very worn path to his grave; everyone in town had been there. I was about to add my two cents, just the right string of curse words, when the same counsel came back to me, "It seems a waste of time."

So that was it, I was finally reconciled. But as I turned to leave, never to return, who was standing in front of me but the ghost of Old Man Harris himself! Just like in the movies, tattered clothes, indistinct features, a serious mien, like a lot of people I know in everyday life. But it was Old Man Harris himself, that's the key thing!

I had been reconciled, but Harris needed to reconcile with me! I would've never guessed it. The spirit collapsed to his knees, sobbing, "I'm sorry for that time I named you in the school assembly, calling you the biggest failure I'd ever known." I thought, "Gee, I'd forgotten that," but I nodded. "And I'm sorry for that time you brought a hot plate and a can of soup to school as a lunchroom protest, and I forbade you to go through with it." That I remembered, but I was surprised he did. "And I'm sorry for that time I shook you forcefully in my office when you were falsely accused of making a culturally-bound and otherwise arbitrary gesture denoting craziness on the part of a particular teacher." Damned straight, I was falsely accused. But, I thought, all gestures are culturally-bound and intrinsically arbitrary without a common basis of interpretation. See, I'm not such a failure.

I no longer needed Deanna's counsel. There wasn't one iota of anger. I looked at that ghost like he was a basket of sweet puppies on fluffy terrycloth. Long story short, he came home with me, staying the night in the "ghost room." I know, "Boo..."

And now, within the last hour, he and I finished a nice breakfast and were reliving old times. He admitted making many mistakes, and I had to confess a few of my own. One of his biggest mistakes, he said, was ever becoming a principal in the first place. "That was all my dad's idea. I wanted to join the Army and be a drill sergeant." I had to nod and chuckle, "I can see that."

I said, "How about we take a picture of us, old enemies, as it were, but now old friends?" He smiled broadly. He definitely liked the adult me much better than the kid, but who knows what problems he may have had as a principal? You're dealing with cranky parents all the time, on and on. I set the iPhone up and had the timer on and the camera app clicked. It's a very tender picture that I will always treasure, showing me sitting there with my arm as though around someone, but it's just me.

Deanna was exactly right, this is the way to live. He and I simply hung out, had another cup of coffee, then I said I had a busy day ahead and he probably did, too. Maybe he'd better float back up to his heavenly reward. "Whatever happened in the past," I said, "none of it matters. All is forgiven and forgotten." The feeling was mutual. Old Man Harris nodded and smiled, indicating everything was copacetic, which means hunky dory, which means good.
Posted by dbkundalini at 7:42 AM

Thank you for your comment! I didn't know what would happen, but in the end I always like reconcilation. Glad you read it!