The Wonderful Vistas of Life 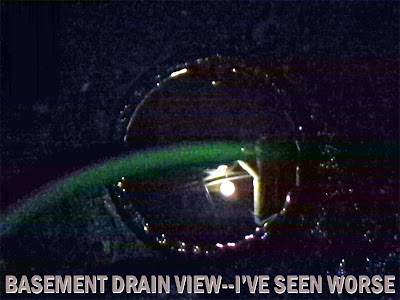 It's a real pleasure for me to sit and type this. It's been a busy day, getting cool by lying on the basement drain, the lowest, coolest part of the house. It's my go-to place when everything's closing in, various family crises that we all face, like the morning paper was late, or, worse, a favorite show's been preempted.

We all need somewhere to clear our head -- I'm convinced of it. Some people like the rich variety of vistas out in nature, which is good, I suppose. But there's a few downsides to everything like that. Most of the great vistas are pretty far away, and you have to drive there, with all the troubles of traffic that are everywhere. I went to the grocery store one day and was cut off three times. Which wasn't the worst of it, since I had several near collisions with other people's carts.

I'm not saying the basement drain is without nuisances. It's wet, dank, and kind of ugly. When they came up with basement drains, it's starting to look like beauty wasn't a priority. They're instantly rusted. Somehow dryer lint shows up. And different sorts of unknown floor scum accumulates. If you watch dust bunnies under your bed, these are the basement equivalent of that. Which is fascinating, since entire moons, planets, and planet systems formed basically the same way.

But to each his own. Which is not to say I don't like the great vistas of life. I do. I'm just not easily enthralled by anything. Like standing at the edge of a cliff. That's a vista. You can look way out there, the horizon's so far away, but crystal clear. You think of what's going on at the horizon. Then you realize, it's just a place that looks like here. And if I were there, I'd be looking up here at this cliff and wondering about it. All kinds of things, then, can happen at a cliff. The most obvious is someone running up behind you and pushing you off. Or someone running past and diving off. You climb down, and he's dead.

Going to a beautiful lake, you're not immune to troubles. Loch Ness comes to mind. And rivers are full of disasters, which I know by watching the "River Monsters" show on Animal Planet. Of all the Animal Planet shows, I think "River Monsters" is the best one. I used to like to fish. But the best thing about it is now I'm appropriately wary of rivers. And  how about forests? Talk about a vista. I love to see forests from a distance. But then you get up close. There's bears, signs warning of leaving the trail and telling what to do if you find body parts, moose charging at you, and on and on. And vampire bats.

Meanwhile, right there at home, you've got the main line to coolness, the old shower drain in the basement. And all the privacy in the world. You can sit there in a silk kimono, which tends to cling in the dampness. Or you can just sit (or lie) au naturel ... as long as you can stand it, with your skin pressed against the coolness and hardness of that antique cement. (Some houses are more modern than mine.)

In my case, the old shower doesn't do a thing. It's rusty, too. Even if you could get it working, it'd probably run rust for the first three or four years. The bugs, the spiders, it might be too much, but it's nature. Ah, the spiders! They actually don't hurt anyone who doesn't mess with them. I can see their webs in the corner, and they seem to be minding their own business. It's all part of nature's balance.

Then I look over at the furnace -- this is a fantastic vista -- I can see the pilot light of the furnace, if I position myself ... just so. How peaceful, like a candle in the temple, a flickering, eternal flame. Good time for a little prayer. "Lord, please don't let that furnace blow up."

If you want the wonderful vistas of life, it looks like it's just as Dorothy discovered: There's no place like home, and the very best vista of all, right there nearby, in the coolness and privacy of your very own drain.
Posted by dbkundalini at 12:41 PM