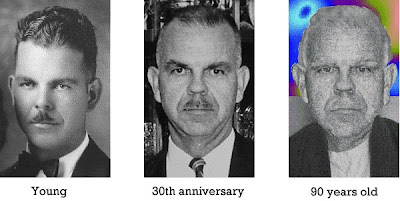 One of our dearest friends, Horst, recently turned 90 years old! The big 9-0. Time to look back, for sure, and a time to look ahead to all the great years to come!

For Horst everything is getting better and better. Now he has lots of time on his hands at the nursing home, and that can be a kick.

In the long-ago far-off days of youth, Horst never dreamed he'd live to be 90. He was a handsome guy (still is), and all the girls had a thing for him. Especially one girl, the girl he would marry. (But more about her later.)

Take a look at Horst on their 30th anniversary. He's pictured here with his dear wife, Edna. (Unfortunately, Edna had to be cropped out because we wanted a uniform format on this page.) They not only look happy, they were.

At 90, Horst has nothing too much to worry about these days, just to take it easy and try to stay out of the nurses' way. Edna passed away a few years ago, and that was sad. But Horst's family made it much easier for him by having the newspaper print a poem, which read in part:


God broke our hearts to prove
He only takes the best.

What would people get Horst for his 90th birthday? Well, turns out there were all kinds of things he'd probably like. Like this "Footprints in the Sand" decorative thing. Horst's surprise comment on opening this gift: "What the hell is it?"

Of course, a singing bird clock is a gift idea that can't miss, whether your intended victim is young or old. And so it was for Horst. His comment after opening this gift: "What the hell do I need this for?"

And these days, the Boogie Blade is very popular as a gift item. It's kind of like the Boogie Bass (singing fish) or the Billy Bass (another singing fish), but this is not a fish nor does it have anything to do with birds, but it's a singing and dancing windshield wiper! Anyway, it was an obvious choice for an old guy like Horst, whose eye is just naturally captured by something so novel. Horst's comment on opening the Boogie Blade was touching: "What the sam hell — ?" 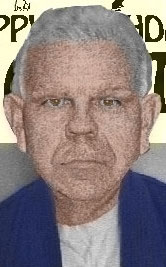 There was music and ice cream, and quite a few cards.

A nurse asked Horst, "Do you know how many people are here?"

Horst's beautiful reply: "That all?"

Horst, we know this is a happy time for you, with 90 Big Ones under your belt! Our sincerest wish for you is just this: May you have another 90 and then some!

The formatting had to be different from the 2000 website. Here's the animated gifs I had of Horst at 90 and the Boogie Blade. The Boogie Blade originally had a soundtrack of snippets of various rain songs. I worked on the 30th anniversary picture with Photoshop to try to make him look around 90.

To learn about the actual guy in the pictures -- Elbert Macy -- see my post at THIS LINK.

Posted by dbkundalini at 7:01 AM