The Books of Pipe Smokers 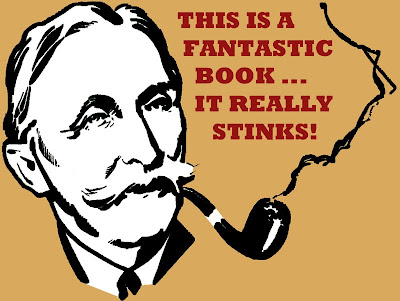 Let me tell you about the books of pipe smokers: They stink!

That, of course, could be too harsh a judgment. Maybe they don't all stink. Because it depends on several factors: How often they're smoking pipes around the books, whether the books are on the shelf or table, and how much exposure the book gets to the air.

When I think of pipe smokers -- a habit I don't encourage, by the way -- I think of guys who just naturally have the patience to sit and linger over a book for hours. If you've ever smoked a pipe, you know what I mean. For smoke delivery, the pipe demands patience. They tend to go out often. That's why whenever you see a guy smoking a pipe, he's either lighting it or getting ready to.

I've had books over the years that I only suspected were owned by pipe smokers. They had just enough of the ambiance of smoke to at least whisper, "I've been around pipes." But then there was this one single book, just one book in particular, that I remember so clearly ... it was one of a pipe smoker's absolute favorite books. I bought it used.

The book was a collection of Jewish humor, jokes or folklore. And if you know humor books like this, or folklore books, you know they are something to linger over. Not like knock knock jokes or elephant jokes. By the way, I made up a knock knock joke the other day: "Knock knock, Who's there?, Enema, Emema who?, Eh-na-mauntain high enough, nothing to keep me, keep from you!" You wouldn't smoke a pipe over that joke. You might roll a cigarette in it, anything to get rid of it.

But this book of Jewish humor was a great one. I actually wish I had a copy of it. But I couldn't keep that copy. I say that even though I actually had it for years. But it was in a box and not exposed to my nostrils. I just couldn't stand to be around it when it was out.

But whenever I saw it -- from time to time I'd go through the boxes -- I'd smell it, and, yes, it was still an inferno. Then I'd forget it and start to imagine the guy with it. Pipe's blazing away, of course. He's reading in a comfortable home library, getting pipe stuff on his fingers, and turning the pages. He's delighted with the book and tapping the cover, "One heckuva book!" Maybe he even tapped his pipe on it. One beloved object to another. Then he'd think, "I'll leave that one out and look at it a little everyday." So there it remained, setting on the table, as pipe smoke swirled around it day after day and settled. And a couple weeks later, he'd do it all over again...

I don't know why he ever got rid of it, unless, probably, he died and the family couldn't stand to have it around. They knew how it was. For this guy, everything centered on his pipes. The little collection of them was in one of those pipe holders, like a small lazy susan. And this book, probably like a lot of his other possessions, had to go.

I said I kept it in a box. I really didn't want it affecting (or infecting) my other books. Now, though, it's gone, when I did some downsizing a few years ago. And this was actually one I would've kept ... had it not been for the overwhelming odor of that guy's greatest enjoyment, his pipe.
Posted by dbkundalini at 2:08 PM