I Take Life, I Give Life 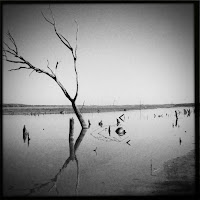 It's forever ago that I've had to kill anything (excluding the occasional mosquito or ants). I don't like killing at all. I'm like the old reflective gunslinger who's simply had enough of bloodshed.

But lately there's been a mouse at my place, terrorizing me, ripping into bags of Oreos and corn chips and who knows what all. One night I was sitting there and heard a noise but just figured it was my dog Underbrush, but when I looked, she wasn't there! That's when I discovered, there's some other life form in the house!

Since then I had been trying to catch it. The first time the trap just set there for several days, nothing. Then, because this is one of the newer mousetraps that don't work as well, the mouse ate the corn chip but didn't get caught. Then a couple days ago I reset it and made it more sensitive, with the mouse finally getting caught this morning.

I got up and looked to where the mousetrap was but it wasn't there. Just a little more looking and I discovered it with a mouse in it that was still alive. His head was under the bar but he wasn't dead -- O crap! There'd surely be no releasing him in the wild, because the bar had to have done severe damage.

This is very unpleasant for me to say, but it was simply out of mercy, that I had to take the thing outside and kill it, as quickly and mercifully as possible. That was a terrible way to start my day, and I could barely think of anything else afterward, feeling very sick.

Later in the morning, then, I went out to the country, taking pictures. I have my iPod camera and I like some of the pictures I get. I was messing around at this bridge, a place I've never actually stopped before. So it was a one in a trillion kind of thing that I happened to be there.

I climbed down the bank, went down below the bridge, saw a cool shot maybe 50 yards to the east, near some dead trees with water way up them. I went over, took my pictures, then headed back. While going, then, I saw a good sized catfish on the ground, some bloodiness on its mouth area, but it was still moving its tail.

There was no one around, yet someone, maybe an hour before, maybe 10 minutes, whatever, had left a catfish behind. How terrible, because a catfish is a desirable fish, nothing to leave to die on the bank. Unlike, say, a carp, or something worse, something that is technically illegal to throw back. A catfish is far from that category!

So I got a hold of its tail and put it back in the water. It started moving and swam slowly away. Of course I have no idea what will become of it, whether it will survive, but you have to admit its odds are better in the water than on the bank!

I don't know why I had this kind of morning. I haven't seen a dead mouse in years and I don't know that I've ever come upon a live catfish on the bank before. Anyway, the bottom line is, I both killed and preserved life, all in one morning...
Posted by dbkundalini at 3:16 PM