It's Me Against The Murderous Maniac 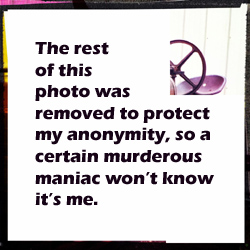 I've got to be real cagey about what I say about this matter. It seems there could be a murderous maniac on my trail.

It all started, like most terrible incidents like this do, with a road trip. I wasn't satisfied with what I could find in my own backyard, even though if I learned anything from The Wizard of Oz, it had to be that. Instead, I went out of town.

When you go out of town, especially as I did to a small town, you're just setting yourself up for trouble. The few people you run into are monitors for the rest. They're not used to strangers, but when they see one they go ballistic.

I perceived that I had quickly become the talk of the town. My vivid imagination told me that's the way it was, and naturally all my paranoia flags went up. Maybe if I hadn't stopped in at the local cafe it wouldn't have happened so fast. But in the time it takes to get a bite to eat, not only can word go out that you're in town, it gives them time to learn everything they can about you, assuming anyone there has access to the internet.

OK, so far, so good, at least I thought. I probably should back up and say why I was there. A couple months ago I got an iPod with a camera in it, so I've been having a good time taking pictures. As a guy with no demonstrable artistic talents, yet who considers himself a natural born artist, being able to push the button on a camera and have it yield a colorful picture, is a godsend.

Anyway, there I was, scouting locations for my next masterpiece, and I felt eyes on me. Eyes perhaps attached to bodies with hands attached to machetes! This is one sadistic little burg, I told myself, and I answered myself that that was a good point. So I was conducting myself cautiously, to say the least, even gingerly, with careful footfalls, prowling around in my car like a cat, stalking my prey, colorful scenes, rustic signs, rusty cans in alleys, a house in shambles, or, if luck would have it, a naked lady on a hammock.

When it comes to being killed, I like to think I'd have some premonition that it was about to happen, so I could avert it. But it happened suddenly, without warning. I saw a certain rustic thing, in part pictured above, with a metallic steering wheel and seat, hooked to a motorized vehicle used typically in farming, which I shall not name. Really big wheels in back, tiny ones on the front under the motor.

Then, and this is where danger reared its ugly head, a guy comes out of a barn. He's got what I'm picturing as big murderous eyes, a maniacal sneer, and he's wielding a big bloody machete, and I see what looks like fangs sticking out where his teeth should be. His hands are big and gnarly. His bib overalls are only fastened on one side and the other side is folded down. There's dirt on the T-shirt underneath, like maybe he used it at some time to wipe blood off his hands. His nose is breathing out smoke, like a bull in the arena. It's all I can do not to hulk out and throw a tractor at him, or at least my iPod.

Seriously, this guy was a mountain. No ordinary weapon could possibly kill him. It'd take a nuclear bomb app. If only I could get signal out here in the wild! I'm thinking, iTunes, don't fail me now! What would I give for an app like that? Up to $2.99, especially if it had at least 4 stars. But since there wasn't a signal, I decided to try non-violence. Could that possibly work? Possibly, at least long enough to get me the hell out of there.

He was murderous. He had a look in his eyes that threatened to tear me to pieces, limb from limb. And these were his exact words: "Can I help you find something?" Sounds helpful, right? But that's just code for, "What in the hell are you doing on this property, seemingly tampering with my tractor?" Real accusatory stuff! Since I couldn't nuke him, I begged off, "I'm only taking a picture of this ______ [see photo]." He said some other stuff that I couldn't make out, mostly guttural roars, foaming at the mouth, as I backed up slowly, opened my car door and got in.

I spun it out of the alley doing 40 miles an hour in reverse. Then I laid rubber on the road that probably stretched a whole mile. I imagined (and actually saw, I believe) zombies pouring out of old shuttered buildings. An old lady zombie ran into the road with an apple pie, heaving it at my car. It landed in perfect condition on the passenger seat! That was the high point of the whole experience.

But friends, this murderous maniac, the guy back at the tractor, I believe is still after me. I'm writing this as a kind of last post, in case I don't make it till tomorrow. If I don't make it, please send help! And nuke that little town ... all the way to hell and back!
Posted by dbkundalini at 1:55 PM