On A Library Computer... 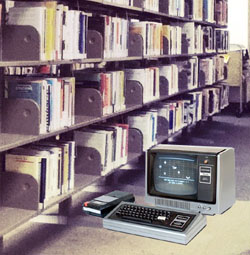 This is different. I don't think I've ever done this before. My normal practice, my constant practice, is to write my blog at home. But here I am in a public library, typing away.

It's quite the deal, really, and I feel a certain amount of pressure. For one, I don't know who might be standing right behind me. I'll look. Good, no one was there. The other pressure, and a more realistic pressure, is that there's a "Session Information" clock at the top of the screen, showing I have (gasp!) only 59 minutes left!

I'm thinking it over, and, no, I've never done this before. I had to scan my library card, then type my card number in, then get a printout of my "reservation," then type the confirmation number in the computer. I guess the only thing we're missing is the barbed wire gauntlet and the razor fence. I don't know if that's a very funny thing to say, but I can't go back ... I've only got 57 minutes left!

Oops, I said I had 57 minutes left and immediately got writer's block. The pressure is too great. Anyway, maybe this is the way to do things, with a clock. At home I'm sitting there, lingering in thought forever. Here, there's going to be some other guy step up in 56 minutes and ask to cut in.

UPDATE: Time has passed. In the meantime, I wrote a post about "Hillbilly Restaurant Reviewers" and "Parts Numbers," how to decipher a parts number, using elevator parts for my example. Check out the list of my posts and you'll see those two. I wrote those in the 56 minutes I started with above, and at this point I have 7 minutes remaining. The computer interrupted me at 10 minutes to go to let me know I was running out of time. Libraries! They're never as good as you think they should be. They limit you on this or that. I don't see a line of people over at the station. Seriously, you have to give them your library card to look at the USA Today! No joke, even though it sounds like one!

The advantage of being limited to an hour, in this case, is I wrote those two posts lickety-split, and didn't take time to supplement them with graphics*, like I always do at home.

Hey, guess what, the thing just "extended" my session by 10 minutes. Wonder why? Maybe the librarian is reading my complaints in real time and decided to mess with my head. Probably so. Being the center of the universe and beset by all kinds of purposeful machinations, as I always am, is what I'm used to. But you know what, I'm sticking to my original hour. Meaning I have 4 minutes left, even though it says 14 minutes now. Mess with my head, I'll mess right back! The librarian will be going, "That guy didn't accept my benevolence," which is true. I don't need their filthy charity. Maybe someone else is waiting, just around the corner, all humble and not wanting to be an inconvenience to me; that's the way I would do it, not wanting to be an obvious nuisance to anyone.

So 2 minutes left on my now self-imposed limit. Oops, had a phone call, now I have 1 minute left, or some part of 1 minute. I must hit the post button ... NOW!

*Graphics added later, at home.
Posted by dbkundalini at 10:20 AM