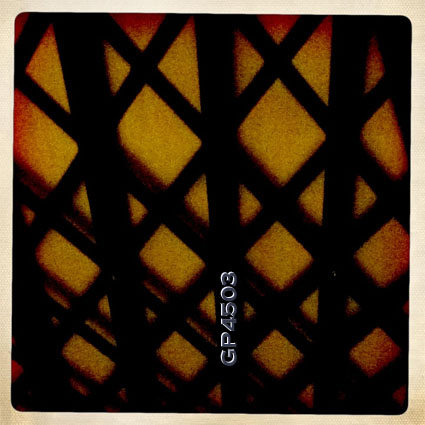 I'm always interested in parts numbers. Meaning, seriously, it's true that there's nothing I'm not interested in.

You might find me. I'm out scouting around town, examining everything I see. If I see, let's say, an old elevator, I want to know everything about it. To me, that's romantic, the stuff of bygone eras that is, wonderfully, still in use today. There is in fact an old elevator I was looking at one day, made by some company in Council Bluffs, Iowa, probably sometime between 1910 and 1930. I looked at everything about it that I could easily see. I'd try crawling under it or on top of it, but since it's actually in use, I might get crushed if I did ... so I won't.

One of the things you notice when you're looking at all this stuff, is that usually you're going to see a parts number, because, I guess, they needed to keep track of a lot of parts. So this lever or this gate piece will have a parts number on it. Let's just say the gate piece is GP4503. Which, arbitrarily, I will guess means, "Gate Piece 4503," the 4503 referring to something. It might be that every part they ever needed is simply sequentially numbered, with the letter prefix being changed depending on what it is. Or it could be that the 4 stands for something, the 5, and so forth.

I can see how even back then they'd want to manage their parts numbers so they wouldn't get confused. Write it all down in a manual, then have it filed away somewhere so that, if the current management all died they could still hand on the company in a reasonable way. You wouldn't want the new management to think the parts numbers were simply sequential if indeed the numbers meant two, three, or four different times.

Let's say the 4 meant "fourth floor." The parts guy -- the stock man -- would know, when he had to supply an assembly line, that "GP4" meant he needed to go to the gate parts on the fourth floor. That's easy. 5 might mean the "fifth station" on the assembly line. They're going to need this particular part at a particular place. It wouldn't be any good to put a fifth station part back at the first station. Then 03. That might mean the third cubbyhole on the line or something like that. If the 5 meant "fifth station," it's unreasonable that the 03 would mean anything other than something at the fifth station.

I might need to revise this, though, because I have him getting GP on the fourth floor, which was the GP4. But it seems like you'd need more of an identification of the actual part than where it goes on the line, unless the stock man was simply filling requisitions for particular places on the line. Because what if you were making various kinds of gates for different styles of elevators? That there's only going to be GPs 1-9 doesn't seem reasonable. You'd need to allow more more gate parts.

I know, especially these days with computers and branch offices everywhere, that part numbers definitely need to be more complicated. And what everything in a modern part number means, I'm not going to sketch out a full guess. But let's just give an arbitrary number to a modern elevator part. XL10345SQV6730. That's the part number. OK, like I said, I don't know everything about it. But I do know that the S in the middle means "Southern district"; I'm smart enough to know that. And in this case -- if you didn't know this, I'll forgive your ignorance -- the QV is a kind of tribute to one of their longtime and most beloved employees, Quincy Valiant, who worked tirelessly in the Southern district, even though now he's dead.

I changed my mind, I will hazard to guess what the number means. XL1 is the elevator type, 03 is the bin they keep it in, 45 refers to the originating station, S is Southern district, QV is Quincy Valiant, and 6730 narrows it down to the exact place it goes on the line. Obviously, their numbers aren't sequential!

I hope you've enjoyed this post. I would be interested in your comments on parts numbers, and whether you think I'm on the right track on some of my guesses or whether you think I've got it all wrong. Leave me a comment.
Posted by dbkundalini at 11:06 AM