Beggars Have No Choice 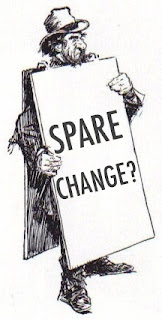 SUMMARY: Looking at the phrase, "Beggars can't be choosers."

I'm sitting here contemplating the implications of this, and it's blowing my mind. In my thoughts I'm taking it all the way from the simple choices we all make to metaphysical questions of free will period.

Did I make the choice to write this post? Or is some higher power, with too much time on its hands, compelling me? If times, events, and circumstances are all set in stone, am I simply a marionette, a wooden-headed dummy dancing to the pulled strings?

Hmm. See what I mean? I've got myself tied in knots, or if there's no choice in the matter, the strings have themselves tangled inexorably around me and I'm stranded, no recourse to the life I prefer or even a more interesting imprisonment. At least add a sexual component to my misery!

And it's all because I started thinking of beggars. I saw one and this whole conundrum was triggered in me, and now I'm bound! But still -- thankfully -- I feel subjectively like I'm making choices. I'm at least sitting here apparently writing this out of my own head. As bad off as I feel right now, I don't feel I'm completely in the beggar's position, having no choice. Because, as they say, "Beggars can't be choosers."

OK, assuming the rest of us do have some power of choosing, at least for the sake of argument, we are so fortunate that we're not beggars, who have no choice. Wouldn't that be bad?

I'm wondering how it must be for them, no choice. Wow! When did it start? Obviously when they started begging. Up till then, it would seem they had a choice, but once they crossed that magical divide -- whether in the decision to become a beggar or in the first instance of actual begging -- all choice was lost. From then on, life for them became absolute compulsion.

I feel that the implications of this are staggering. Why, of all the experiences in humanity, would begging carry what appears to be a singular penalty? And how would the determination (or verdict) be rendered so swiftly, especially if it's imposed at the decisive moment rather than with the first behavioral instance? It would have to be a special decree of karma, one that uniquely presents no delay or variance. Astonishing!

Personally, I don't think it could come at the moment of decision, at the mere thought of begging. Think of it, the intention is there to be acted upon, but at that point he has not yet begged, making him something less than a beggar. It doesn't say, "Near-beggars can't be choosers." So there's still time to turn back. O, if near-beggars only knew this, they'd turn back before it was too late!

But the moment for some, alas, does come! The cardboard sign is scrawled, the hand is outstretched. The sky suddenly darkens, distant thunder is heard, one's personal star falls into the pitch-black sea, and the brain mysteriously twists and cuts off whatever avenues of choice were once free and clear. It's as though a film covers the eyes. What darkness it must be to have absolutely no choice!

And how about this? Now, he cannot even choose not to be a beggar. Because beggars can't be choosers, the word can't being a contraction of the longer cannot, meaning something that is an absolute impossibility. Destiny will cut him no more breaks, no matter how much he begs. But, on a more cheerful note, perhaps there is only a dull realization, or no realization, of this fate, so that he never mourns it, being unconscious of any other life previous to that of begging. That would be the sweet elixir of forgetfulness, a gracious cloud!

But what about all the other day-to-day choices, which side of the street to beg on, whether to keep begging or go home, whether to go to the bathroom when he needs to, etc.? The choice to put on warm clothing if it's cold, or to strip down if it's cool? To sit in the sun or move to the shade? To eat, not to eat? To thank people or just grunt? These too would be choices, would they not? If he has no choice, thank heaven some force -- beneficent existence itself -- is guiding at least non-conscious actions!

The lesson here is, Whatever you do, friends, don't beg. Treasure your freedom as long as you can. Steal instead.
Posted by dbkundalini at 2:58 PM