A Dead Guy's Mustache -- As Close As You're Gonna Get 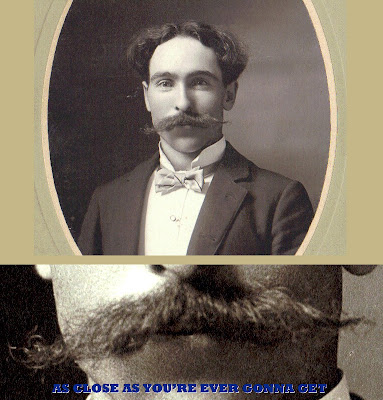 CLICK PHOTO TO GET AS CLOSE AS YOU'RE GONNA GET

This guy lived and died a long time ago, maybe 100 years ago.

There's lots of maybes. Since he was a young guy in this photo, he might have lived quite a while after this, with his mustache turning old and gray and eventually falling off. Or he might have sat for this picture, caught viral pneumonia from a sick photographer and fallen dead just moments after the shutter clicked.

Either way, he's certainly dead now, and his mustache presumably is lost forever. Exhuming the body is out, not only because of the various legalities that would have to be dealt with, but because we have no idea, no clue as to his identity. The only information I've been able to glean is that he lived, had a great head of hair and mustache, and died. And that he sat for at least one photo at a photography studio called Veatch in Cedar Falls, Iowa.

Cedar Falls, Iowa? Now we're making progress! Which is probably still a dead end. Of course, if you want to go for it, be my guest. I am personally going to stand down and let the poor man rest in peace. And accept it that his mustache is gone forever, and that this enlargement is as close as I'm gonna get.

Still, isn't it a tantalizing detail that ... somewhere near Cedar Falls, Iowa, in a lonely, perhaps forgotten cemetery, this mustache still rules and reigns the nether realms six feet under? For me, it changes nothing. I'm still standing down!

So barring a miracle, an identification and the knocking down of many legal barriers to exhumation, I'm as close as I'm gonna get to this great example of a flamboyant mustache.

Isn't life amazing? We try to deny it, but life always comes with limits. You see a guy with a mustache, and he passes by, usually without allowing us a super close-up. Of course the inaccessibility is greatly multiplied for guys who lived and died a hundred years ago. But thanks to photography -- a relatively recent invention -- we're able to see it in all its glory.

So today -- and today only -- you and I have this rare opportunity, a treat, the chance to zero in on this particular guy's cool mustache. Friends, feast your eyes! This is as close as anyone's gotten since he passed from this earth. And it's a chance that likely will never come again.
Posted by dbkundalini at 9:05 AM