Whatever Happened to Bushwhacking? 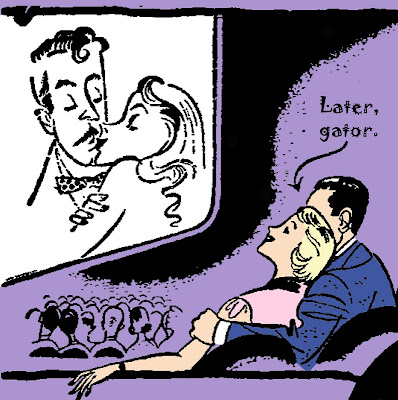 These typical teenagers will soon be "parking" on a lonely country road.
At least, they HOPE it'll be lonely!

One of our biggest fears years ago was bushwhackers. Those dreaded ambushers who came upon you parked on a lonely country road to interrupt ... whatever you happened to be doing. Which might or might not have involved intimate romantic contact. I hate to be specific.

Whatever happened to bushwhackers? I never hear anything about them anymore. Although it could be that I'm not in the right company to hear much. I fear that if we had bushwhackers yet today, they would've taken it way beyond the free meal, belling of the antenna, and smudging of the license plates. In today's brave new world, they might kill you!

Maybe there's not that many kids parking anymore, with changing standards. Standards have loosened, so maybe now they're just in their own rooms going at it. I really don't know. "Jimmy, when you and Joan are done, please come down for dinner ... and don't forget to straighten the sheets!"

Of course, it wasn't that way years ago, like other things that change over time. But if the current generation (or their kids) knew where they came from, those illicit assignations along the roads, they might have a greater appreciation for the old days. Parking itself was a result of changing standards, a more mobile society. So if it has switched in the meantime, we'll just chalk it up to progress.

But when parking was going on, it gave rise to an antagonist, the bushwhackers. Those terrible bushwhackers! Who were out and about, hoping to catch a glimpse of nudity, perhaps, and certainly to interrupt the proceedings.

The way I remember it, though, there was more to it. I alluded to it a little above. It was like a sport. The bushwhacker carried a string of bells, and once those were around your antenna, you were his captive. That gave him the opportunity to take the young woman's lipstick and smudge the license plate up real good. Then you were obligated to take him to the diner and pay for a free meal.

I always hated providing the free meal. Not so much the expense, but the time and trouble it took to go with him. We'd be leading the way, and there he'd be in his car following us, till we pulled in. I bought more patty melts and french friends back then than I have at any point in my life since! And it wasn't fun. I'd be sitting there irate.

These days, even if there are bushwhackers -- I said they might kill you, but they might also fear getting killed. With everyone packing heat, anything could happen. It could turn deadly real fast! Which is probably why you never see bells around antennas or lipstick-smudged license plates anymore. That was terrible, your dad coming out in the morning ... "What have we here? Lipstick on the license plates?"

It's terrible, the memories, but of course it went with the territory. Now, looking back, I can see it was all in good fun. A few of the bushwhackers I even remember with a degree of fondness. One of them was even mayor of the town way after we all grew up. So that's a strange bit of trivia, something I never expected back in the day, buying him a patty melt.
Posted by dbkundalini at 3:14 PM