Helping the Disadvantaged Make Their Own Granola 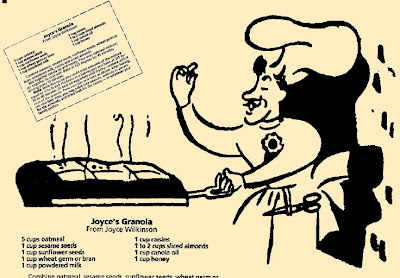 I've been looking into the whole matter of helping the disadvantaged make their own granola. And here's what I found:

Granola is a delicious snack often eaten by the health-conscious, made by assembling together a number of healthy ingredients. These include, but are not limited to, oatmeal, sesame seeds, sunflower seeds, wheat germ or bran, powdered milk, raisins, almonds, canola oil, and honey. Then it's a feast, when everything is just so, prepared according to the specs.

I've actually probably been eating granola all wrong most of my life, since I've mostly had the granola bars or some other prepackaged store-bought granola-like treat. How much better it would probably be if you made it from scratch, according to a recipe by someone who already knows how to make it. I'm definitely hoping to try it. You can find many recipes for granola online, or you can search various granola recipe books for good recipes for granola.

I probably should say, I've never really been on the granola bandwagon, such as it is. Why exactly that is, I have no other excuse than the simple fact that I'm lazy and not in the habit of trying different things. I like to say, even though the fallacy is easily demonstrated, that I never eat anything for the first time. I'm in a groove -- some call it a rut -- and once there, I have stayed.

But a big heaping bowlful of granola sounds pretty darned good right about now. There aren't that many treats in the house. A few cookies. A little ice cream. The same old same old. Nothing like granola. But you know what? Even though I've found all these killer recipes for the stuff, that would mean going to the grocery store and probably spending $30 to make it. Or a little less. So at this point, I'm just going to suffer without.

Today's bottom line is simple: Granola is good and good for you. But if you haven't got the stuff to make it, and don't feel like going to the store, you're out of luck.
Posted by dbkundalini at 2:21 PM