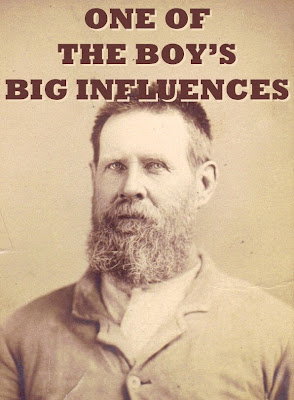 A picture I showed him for inspiration

I'm only going to sketch this out in unspecific terms, since it's based on an actual bearded boy I know. His beard is nothing like what it's going to be. If I'm unspecific, that will provide cover for him, so teachers, school administrators, and even his parents won't suspect what's going on.

I was talking to him a couple of days ago about his beard. He's young, around 15½, and I'm old, around 60½, so my influence, the wisdom of my years, might really sway his behavior. He seemed excited about the prospects of what is to come. I said something to him about his beard, and right away I could tell he was preparing to defend himself against criticism. But I didn't criticize. I said it's cool and encouraged him -- gave him a great idea -- that he needs to really grow it out.

Keeping this unspecific, I told him he needs it down to here. Then cut off his mustache and just have that menacing look of a guy with a beard and no mustache. Carry a small pitchfork, like the kind they put in cupcakes, and get a TV shirt that says "Amish and Angry." His eyes lit up, he was happy with this cool identity dream. He indicated, yes, this is what he would do! So I was happy for that. What can go wrong?

Now I'm thinking way ahead. Let's say he graduates when he's 18. That means three years from now, meaning his 20th high school reunion will be 2036. By then his old rebellious years are gone, he's mellowed and clean-shaven. He walks in and everyone goes, "You know what I remember about you?" They reach up to their chin and remember the beard. "You were the first full length bearded boy in school. That was the year they made up all new rules against beards: 'No facial hair beyond a day-old 5 o'clock stubble.'"

Indeed, that was the year they made up the new rule. Except he was exempt. They had to grandfather it in, leaving existing beards alone. So he let it grow. Were he to even so much as trim it a bit, he'd break the grandfather agreement and would be unable to regrow it any longer. Since everything grows, even imperceptibly, he'd be a fool to trim it. They'd have him and he'd have to shave it off.

The 30th reunion rolls around and it's the same recollection: "You know what I remember about you?" He's anticipated it and runs his hand over his clean-shaven chin. "The beard?" "Yeah!" the former classmate says, "It was down to your knees!" "Well, it wasn't quite that long, just to here," indicating as low as where the neck ends and the chest begins.

40th, 50th, 60th class reunions. The 40th and 50th are the same. But the 60th is different. Ever been to a 60th class reunion? I haven't, but I've known a few people who have. It's usually you and the other survivor. In this case, looking way ahead, we've got our former bearded boy, still clean-shaven, and one remaining classmate, who has a touch of dementia and so fails to mention the old beard of those glory years. The old boy's OK with the omission, since he barely remembers it either.
Posted by dbkundalini at 3:09 PM