From Feeble Man Stagger to The Beatles 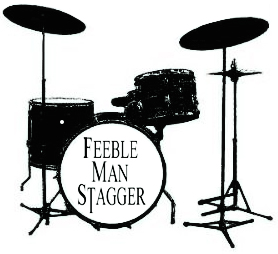 Me and my mates -- Dozy, Beaky, Mich, and Tich -- came up with our own group, me on drums, of course. (I learned a few years ago when I built a platform over the couch to give me something to do during commercials. And now, amazingly, I keep a beat with the best of them.)
The biggest problem for me and my mates has been to settle on a name. We wanted something fairly decent. A good name is ... good to have. But it seems like most of them have been taken. There's not much left.
Anyway, me and my mates got serious about it, and pretty soon we were coming up with ideas. In my opinion, my best idea was Feeble Man Stagger. I was driving uptown and saw an ordinary guy walking like he was drunk. Who knows, maybe he was, but it was early in the morning. Might've been an early stage hangover. The guy looking pathetic, I said to someone, "He's doing the feeble man stagger." Inspiration's funny like that!
Not long after, we got a letter from another group called Feeble Man Stagger and their lawyer, demanding that we cease and desist.
Now, here's something ironic. Me and my mates were drinking our disappointment away and saying over and over the words "Cease and Desist."  You can guess the rest; we immediately started calling ourselves Cease and Desist. Until we got a letter from another group -- Cease and Desist -- and their lawyer, demanding that we cease and desist. Damn.
Anyway, me and my mates weren't sidelined for long, and in the complaining about it, we switched to Desist Again. But not for long, because other groups have been through this, too, and Desist Again was already taken. At first, I was incredulous, "You're telling me you have a group Desist Again?" Yes, that's what they were telling me, with the guy getting real snotty: "That seems to be the gist of it."
Me and my mates were getting desperate, and drinking ourselves back to health, and cussing this guy in abstentia, we repeated his stuffy patrician retort about "the gist of it" until we decided that's IT! We'd be The Gist of It. Which lasted only a couple weeks before some other "The Gist of It" came visiting. They couldn't afford a lawyer yet but we got the message. We tried to argue, but of course we'd eventually lose. In my anger I justified us, saying, "You know, you're not exactly The Beatles! How were we supposed to know?"
So that's how we got the name The Beatles. I figured, sure, there was a group called that once upon a time, but they're dead and gone. As I told my mates, "What could possibly go wrong?"
Posted by dbkundalini at 7:32 AM