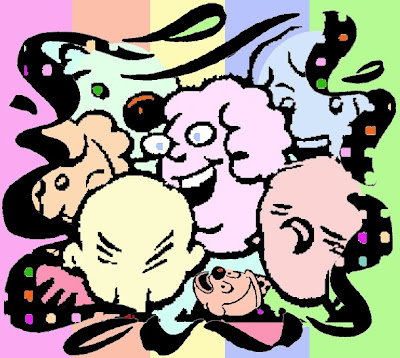 This is about all the hundreds of people that I've miss-seen over the years. I haven't kept a record of them, of course, but they know who they are ... or would know, if they existed.

I'm also referring, tangentially, to the hundreds and thousands and millions of ancestors and contemporary family members and friends that those people would have had, had they existed. But the existence of all these folk is a non-existence, ephemeral, a matter of my limited perception and imagination filling in the blanks.

Certainly, I know this happens all the time to us, probably, although you hardly ever hear it mentioned in polite company: "Guess who I thought I saw today, a guy who didn't exist." You come to understand you didn't see anyone. Or did you? I'm not saying he wasn't there. I'm not saying he didn't vanish in a second. I'm just not saying.

It happens like this: You're sitting there minding your own business, and you think you see someone out of the corner of your eye, then when you turn for the full gaze it turns out to be someone else. Like one day recently, I thought I saw a mystery woman sort of lady, like out of the movies, carrying a birdcage. Then I turned and it was a regular man in a dark shirt, carrying a baby, a blanket hanging down.

Obviously, for it to have been the mystery woman, which would've been cool, she would've had to have existed, with all the factors leading to her, including grandparents and other ancestors, and possibly student loans for attending unknown mystery schools. Then when she didn't exist, all the grandparents and ancestors vanished, and whatever loans she might have had were instantly paid off. On the other hand, it's tough to wish away the actual man and baby, just to conjure up a mystery woman. He has relatives, too!

There's even people I think I see who turn out to be a stack of something, or even a file cabinet, maybe with a plant on top. The leaves of the plant are their hair, etc., until I look, and once I see it's not a person, it's tough to imagine them again. It feels sort of semi-tragic, like I said above, all their schooling is gone, their teachers never existed, their fellow classmates, their pets, gifts they got from grandparents, and their fears of the future, etc., all gone!

It's actually a little easier, if you wear glasses, to take your glasses off if you want to see people who aren't there. I can sit in public without my glasses and look across the room and see all sorts of people. A couple days ago, without my glasses, I saw a guy who looked like an old childhood friend. I knew it couldn't be him. The guy was younger than my friend is now. Fortunately, my old friend is still alive; I see him on Facebook. But for a moment he had a younger twin. Then with my glasses the resemblance wasn't as close.

A few minutes later there was a guy with a beard who looked like a cross between one of my brothers and Solzhenitsyn! He had that Solzhenitsyn beard, but the top of my brother's face. Then when I put my glasses on he still looked basically like this. But younger than Solzhenitsyn when he was most in the news, and a little puffier in the face than my brother.

Getting back to the mystery woman carrying the birdcage, you never see a mystery woman carrying a birdcage. So I essentially knew that when I turned she wasn't going to be there. But what if she was? Maybe she'd be headed to a detective's office to hire him. Her cool, dark mystery clothes, a 1940s outfit, a funky little mystery woman's hat, and a dark cloth over the cage. What a thing to be carrying! These are the kinds of things I want to see more of.
Posted by dbkundalini at 3:23 PM