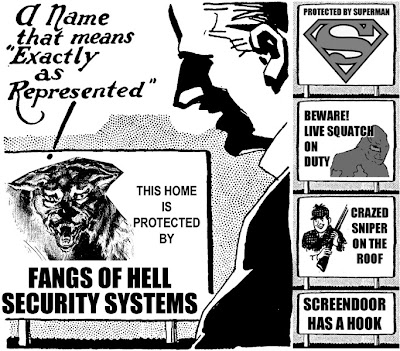 There's probably people out there with actual security systems. Stands to reason. They're advertised all the time, they can't all be fake.

But I know I go plenty of places where the signs are carryovers from old companies. The subscription ran out -- one thing or another -- and all they have left are the signs. Like little shields, they're right there by the door, fading and maybe falling over. Or there's decals on all the doors, also shabby with age.

The bet is the criminals won't know which is which, protected homes from unprotected. Although it seems, the shabbier the sign, the less likely it's connected. Or, if you throw a brick through the window and nothing happens in two hours ... maybe Sasquatch is sleeping.

One of the first fake signs I ever saw was in the early '80s, at Goodwill, no less, where the sign said something like, "This store is protected by a really sensitive security system." No name, no clue as to what it might be; they could only divulge it was "really sensitive." Very primitive ... and not convincing.

I personally have the signs of about five different security companies in my yard, and, I'm not going to say if any of them are true. Although you can probably glance up at the roof and see if the sniper's there or not. There's only two sides of the house he could be on. As for my Superman sign, I'll just admit, that one's definitely fake.

My "Screen Door Has a Hook" sign is absolutely true. But it's very loose, and just a little pressure, like a three-year-old halfheartedly bumping it is all it'd take. Please, though, if you're in my neighborhood, don't try it. Sometimes I put a frozen turkey on top of the door. And I always hope I remember it when I get home.

Posted by dbkundalini at 3:47 PM