Arguing With The Past: Painless Dentisty, 1906 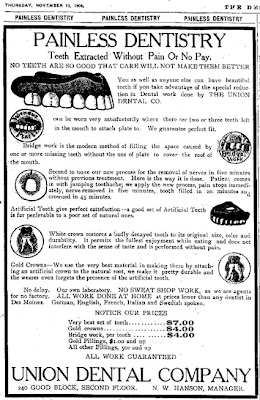 1906. That's over 100 years ago, and you're telling me they had "painless dentistry" back then? I might have to argue with that.

One big reason would be, dentistry isn't painless now, after all these years of refining the tools and techniques. It's relatively more tolerable now than, say, the 1960s when I was most traumatized by dentists. Or the '70s, when I was somewhat less traumatized by them. Or the '80s, when I was even less traumatized. And so forth. The point is, In my lifetime -- encompassing years substantially past 1906 -- there has been plenty of pain to be found in dental work.

But somehow, in 1906 -- in a time of patent medicines and a quack on every corner -- they were able to advertise painless dentistry. I'm sorry, I'm not buying it. But I'm looking right at it and that's what it says, "Teeth Extracted Without Pain Or No Pay."

Maybe there's a little technicality in that slogan. It doesn't say there won't be plenty of pain getting you completely anesthetized. A clunk in the head, like on the Three Stooges. Or what? A large injection of something that will kill you when you get home? I don't think I'd like a dentist in 1906 working in my mouth. I'm not sure what all dentists did back then. I know undertakers also sold furniture, barbers did surgery (maybe years before 1906). What would dentists be doing on the side? Jackhammering roads? I'm sure the equipment wasn't quite as nice as now.

I'm looking at the ad a little closer and it says, "Second to none our new process for the removal of nerves in five minutes without previous treatment." Just give us five minutes of your time and we'll strip your entire mouth of nerves. The way they put that, it makes it sound like your nerves are a bunch of wires clumped back there somewhere, and when they start stripping them they come through the drywall and all.  But reading on, it says, "Here is the way it is done. Patient comes in with jumping toothache; we apply the new process, pain stops immediately, nerve removed in five minutes, tooth filled in 20 minutes and crowned in 45 minutes." Something about the nerve being removed sounds lethal.

And as for going from toothache to crown in 45 minutes, they really did have it over us today, because even today the dentist has to send out for a crown. I've never seen a rack of crowns to pick through so you can find the one you like.

This was the Union Dental Company. The ad is from a Des Moines newspaper. They sound like a fairly large outfit, not like our little dental offices today. One, it says "No delay." So you can get right in. They have their own laboratory, which must be where they came up with the crowns. Then in capital letters it says, "NO SWEAT SHOP WORK, as we are agents for no factory." That sounds good. Then, "ALL WORK DONE AT HOME at prices lower than any dentist in Des Moines." Sounding good too. And listen to all the languages they speak there, German, English, French, Italian, and Swedish! And not an "Owww" in any of those tongues! (I added that last bit.)

I can't argue with the prices. They sound very cheap, only $7.00 for a set of teeth. At that price I might do it like they do contact lenses, just throw them away and start over with a new set every week.
Posted by dbkundalini at 6:35 PM