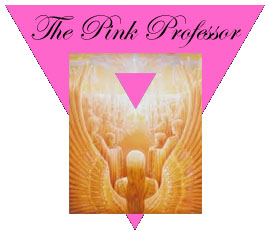 In honor of Valentine's Day, this is a paean to my guy. He knows who he is.

I was always sure Pink Professors existed. Call it a momentary glimpse in childhood that revealed itself then disappeared, like the grail.

I heard of them years ago. Other kids made fun of the idea. They said they knew of one who killed himself, rubbing it in that I was looking for a fantasy that was strung up somewhere. It makes me sick even now to think of what they said, but they were just kids. Kids are evil, like adults, but now they're smart enough to keep it to themselves.

I traveled the country, afraid of what I might find, all the disease out there. And I had offers, but I always turned them down. I would never lower myself in those backstreet places. I kept my integrity. I knew there would be a glistening, descending heavenly city when the moment was right.

In the back alleys, I'd peek through the screen door of every women's hair salon. I saw a lot of fascinating sights, including a Mr. Felix character a couple times, but no Pink Professors. It got so bad that I started doubting, coming to lump it in with the other myths of childhood -- Santa Claus, the Tooth Fairy, and the Land Without School.

Good God, it frightens me to say it today, but I went through a lot of back alleys! I could hear these little squeaking noises everywhere, like little cries for help. Could it be a Pink Professor? No, this was when everyone was raising chinchillas -- and that's all it was. Now, looking back from 2011, a chinchilla farm in every garage is absurd, but back then...

In more recent years, then, as everyone's tolerance level grew, I heard reports of bikers bars that were, suspiciously, more demur than their typical reputation would allow for. But I chalked it up to something else, like more women driving motorcycles; really, I didn't even think about it much beyond that. And yet, I might have gotten in on the ground floor! O, to know then what I know now!

I explored all of culture, the entire counterculture, and even every subculture that was open to me. It's amazing to look back on it, that in all the frustration, I still dared to hope. That, in the face of my hopes being dashed time after time. I'd ask the barkeep, interrupting him as he wiped glasses with the tail of his apron, but the word was always the same, "No, he hasn't been here yet."

After a while, they hated to see me coming. So I resorted to subterfuge, looking over fences with binoculars, climbing on rooftops with a telescope, and peering from manholes with a periscope. You get a lot of funny looks that way, but I did anything I had to to enhance my vision ... but nothing!

Then, one random night, after I'd basically given up, I let down my guard and went to a bikers bar, the Roadhouse. I was thinking I'd probably get beaten up, but if it'd dull the pain, it'd be worth it. My pessimism was on overload. I walked in, and guess what, I almost cussed a blue streak in celebration, there he was! The most awesome Pink Professor figure I could imagine! But it wasn't love at first sight ... mainly because I didn't dare think that far ahead. I had to be sure.

I came home and wrote him up as a hypothetical figure. I hate to refer back to it because what I wrote was simply a mishmash of lies I could barely stutter. But he was real -- there in the flesh, there in the spirit, my Pink Professor! It was September 23, 2010, and I went in that bar with the same thoughts I'd always had, but now they were in the back of my mind. Then reality struck...like lightning.

And so since then we've gotten closer and closer. Love has been announced. The rules of love have been set out. We've talked about s-e-x. And with that, I shall draw the blinds!

I was looking for a particular man to savor, to clamor after, to slobber after, to fall in love with, a person who would show the greatest kindness, and that's what I found. I'm not at liberty to say his real name, so I'll have to keep calling him The Pink Professor...

This one's mine, you find your own!
Posted by dbkundalini at 12:13 PM