The Pink Professor -- My Dreamboat 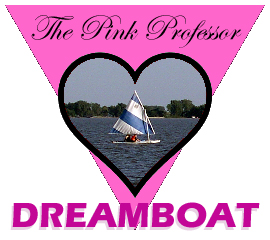 I just came from the Roadhouse (one of the town's bikers bars) from spending time with my dearest amigo, the Pink Professor.

It was an early evening. I left a little early, since he had some responsibilities out there. As should be well known by now, he serves as the Pink Professor figure there, a very beautiful concept. In short, a bikers bar and bikers themselves really flourish if they're fortunate enough to find someone like him -- a Pink Professor figure -- to hang around the place and keep it softened up. The bikers are happy to have his counsel and assistance and perpetually good attitude, and it also gives the bar a nicer feel.

He wanted me to stop by for a few minutes, just to catch up after a few days out of each other's sight. It was supposed to be a few minutes but it stretched to a couple hours! But I didn't get him to myself, of course (and I'm not complaining), because he was called to referee a minor tiff, to welcome some traveling folks, and to talk with a waitress, in addition to just the ordinary "spirit" he lends the place. I did have him to myself for a little while, sitting in a booth together, and enjoying some soft chocolate chip cookies that I baked. I made a bunch of extras because I knew some of the regulars would like one. They were a big hit.

I probably shouldn't say it, but being a Pink Professor figure at a bikers bar is not really an easy position. He gets stressed just like anyone, but of course he knows it's all worth it if he can do the folks some good. This is where I come in, to help him. I played the intuitive card, looking at him square in the eye. He got my body language right away! My look was as if to say, "I am Svengali, and you are under my spell." And I held that look, and I kept it there! He got the message, which was, "You have to take care of Number 1, too..." Then I smiled and he got the message, that I wanted him to relax and have another cookie.

The guy teaches classes all day -- that's his professorial role. Then he's out at the bar many evenings. I need to be there to make sure he keeps his spirits up, and he generally does!

Anyway, I'm sitting there, looking worried, and suddenly he returns the "favor." Suddenly, I found myself arrested by a terrific stare from across the table. "Oh no," I thought, "I let down my guard, and now ... and now ..." His stare returned my exact sentiment, very easy for me to discern: "I am also Svengali, and now you are under my spell." I wanted to turn away; that was my first thought. But then I thought, "This Svengali has dreamy eyes; he can take me anywhere he wants to go!" Then he went way out there, gritting his teeth in kind of a fearsome way, a negative look with a positive message, which said, "You worry too much." That's true, I do...

I put my hand up to my eyes -- I was playing silly, like he'd nailed me -- thinking I might break the spell and escape, and when I would look up again, he'd be looking the other way. But when I looked again, he was still looking right at me ... continuously ... then he burst out laughing, as if to say, "You worry too much, yes -- I nailed you on that. But don't worry about it!" What an ironic thing to say!

The guy is a dreamboat. The Roadhouse is lucky to have him. And as for me, I'm lucky too ... but, hey, it goes both ways! I think I can speak for him, "We're both lucky!"
Posted by dbkundalini at 8:16 PM