Fun On A Crowded Elevator 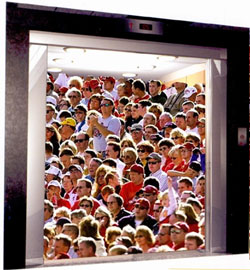 I don't usually enjoy elevator rides. Only if I can get on when there's no one else around and get off before anyone else shows up. When it comes to elevators, I'm antisocial. Even more so than usual. So yesterday, it bummed me out to have to ride an elevator at the hospital that was jam-packed with people.

They have two elevators right off the parking ramp, but one of them was apparently broken down. It was a disaster in the making, since the elevator is already slow, and to have two elevators' worth of people on one might break it down too! Then factor into it that people getting on an elevator in a hospital aren't necessarily healthy or pleasant to be around. It felt like it might be a long trip two floors down.

But I didn't want to wait till no one was around, and circumstances were such that I really needed to use the elevator instead of doing my normal thing, taking the stairs. Because I was accompanying a guy in for his checkup, part of the basic service I sometimes offer real life friends. So there he was, not feeling the best. And there was me. And there was a crowd of others, including a couple guys who had monitors of some sort, maybe breathing apparatuses, I don't know. One guy had something major taped to his nose, like maybe he'd had a deviated septum undeviated. I didn't notice what everyone else's problem was, one, because I didn't need to know, and, two, because there was nowhere to stand where you could get a good view. We were packed in.

But it because fun ... semi-fun, as fun as it can get ... when either the guy with the nose problem or the guy with him said, "Take your hand off my wallet." Obviously kidding around because we were crammed in. Then he or the other guy said, "There's nothing in it anyway." Everyone was laughing. I joined in a little by way of response when I said, "No one's getting off this elevator till he gets it back." There was no grousing about being on a crammed elevator. Everyone was pleasant, perhaps mostly because the ride was fairly short, we got right down.

Out we all spilled, going our separate ways. A few minutes later I saw the guy pushing his monitor around the lobby and gave him a smile. But I don't know if he remembered me for being one of the guys on the elevator. This short story ends about there.
Posted by dbkundalini at 9:50 AM