Can't We Just Let The Snake Eat Us? 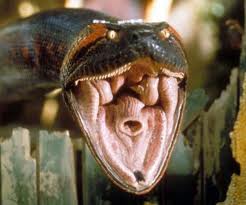 I'm really not in a mood to fight tonight. Good grief, is that all anyone can think of, fighting?

I was just walking through the other room and the TV was on. Whatever I was watching earlier today was off and there was a movie on about an anaconda snake trying to eat everyone. I didn't watch much of it but I got the impression it was gigantic, maybe with a head as big as a couch. It certainly filled the TV, a 46" screen.

I heard just a piece of the dialogue, which was a guy yelling to everyone else, "Only shoot at the head! It can't be killed any other way." I was on my way through the room going to take Underbrush out for a pee and poop.

Since that's the last thing I heard, I was outside thinking about the other possible ways to kill this big snake. The guy said it had to be shot in the head, but I was thinking, "You mean to tell me, if I somehow lured it up on the railroad tracks and the train rolled over it, that wouldn't basically solve the problem?" Wouldn't it be bleeding out the back hole? Or was it too big even for a train to handle? I never saw it in relation to anyone, just in relation to my TV's size.

In my continuing thinking, I was thinking of the few basic scenarios for fiction that there are, like Man Vs. Man, Man Vs. Nature, Man Vs. Godzilla, etc. And this one obviously would fit in the Man Vs. Nature category, with the extra twist we always get, that the animals are way bigger than normal nature makes them. They've always been affected by radiation, pollution, or something. The isotopes go straight to the pituitary, and next thing you know it hulks out and is bigger than anything. That's how the Loch Ness monster got started. He was just a mouse, or some kind of mouse/dragon hybrid, then he bloated up when he consumed something dangerous, like a Big Mac.

Anyway, the imagination -- mine anyway -- stumbles over some of this stuff. It makes me tired just to think about sitting there watching a movie like this. Because you know the exact sequence it has to go. This thing doesn't work, that thing doesn't work, it's hopeless, then, miraculously, we stumble on the exact thing needed, only it's very doubtful -- everything has to go just right -- that we can make it happen before the last 10 seconds allowed for it ticks down.

It makes me think, Why don't we just let the snake eat us? Snakes need to eat too, especially snakes that big. Why are our lives so precious? We're killing things to eat them, why shouldn't the snake get in on the action?

That'd be great. You're a schoolmaster in a little village where this snake has been attacking. All the villagers come to get their children and you're like, "They're not here, the snake ate them." All very calmly. Then you explain, "The world's had enough fighting and bloodshed. Your children lived good lives, but this snake has a good life going too. Frankly, I'd like to see how big we can fatten him up to be. If we keep him well fed, it's less likely he'll want to eat us." So you can see the movie's taken a different turn. Now it's me and the snake against a bunch of murderous villagers.
Posted by dbkundalini at 7:46 PM