Running Circles 'Round The Baby 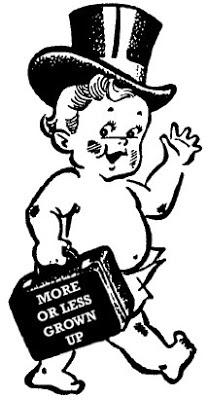 You know me, I'm as normal as anyone you've ever met. I pride myself on that. I see unusual people, and while I may envy them for a few minutes, I'm actually glad I'm so normal. But even normal ones like me -- who knows the exact reason? -- can erupt, especially if push comes to shove.

Well, darn it all, that happened yesterday. Maybe because it was Sunday, a day for going to church, then erupting in euphoria, which the ancients controlled by an afternoon of blood sacrifice, a luxury we don't typically indulge in, unless of course we're country folk. Still, as you know, any sublimated desire, impulse, or instinct is still there. And finally -- call it the devil, if you will -- in the end it can't be denied. The Nazis proved that completely, which makes me feel better, although I know I'm still to be blamed.

Anyway, I felt the impulses rising up in me. You probably know exactly what I'm talking about, an inflationary surge of light through the spine that has to spill out, the metaphysical equivalent of piss and vinegar. You have to rotate it just so. I nearly had time to offer up my dog on a makeshift altar, the patio table, but then they were here -- relatives -- to take me to the party.

Party? you ask. Parties on Sunday afternoon? Yes, if it's your birthday and you happen to be one-year-old. There's a youngster in the family, and in a few days he turns one, although they had his party a few days early. It was a joy to see him, there in his top hat and his little suitcase, naked except for a diaper. He waved at me cheerfully as he walked by, his walk very tentative. It seems he has been walking for only a week or so, and even with that he's not very good. He takes a few steps, then sits, ending in the family's applause.

OK, like I said, I'm blaming my behavior on the piss and vinegar, the lack of blood sacrifice, everything but the Nazis, who already have enough to answer for. The surge of light was so great -- it was a rather nasty concoction, actually, of light and dark; inner cleansing carries many risks. I couldn't help myself. When the baby finally plopped down in the center of the room, eliciting applause, I erupted, running over and then running in circles around him, becoming, according to the sworn testimony of survivors, a tiger-like blur (cf. Sambo story). Then, to save myself from a buttery end, I ran up the wall all the way to the ceiling and fell with a thud. I cried out, "I know how to walk, too!"

At this point I might hope for sympathy (I couldn't help myself). But once you've ruined a birthday party for a one-year-old, in the eyes of the spiritually bereft you're nothing but dirt. Aunts and uncles, friends of the mother, including quite a few guests I don't know personally, lambasted me with severity, saying things like, "This isn't a competition! If you're somehow a better walker or runner than a baby, no one cares!" What could I do? I rubbed myself in the places where I hurt, and a few where I didn't.

But they kept giving it to me, the full impact, piling on. These aren't exact quotes, but it's the gist of the damned thing:

"Even though this child is 11 months old, just short of being one, he will grow! And he will get a better education than you! He will succeed where you failed! Then one day when you're in the nursing home, unable to get from your bed to the wheelchair without a Hoyer Lift and five CNAs, this baby -- by then fully grown and able to walk, if not fly -- will visit you, and he'll run circles around you! He will also dash up the wall, leaving muddy footprints for you to look at, if you're still able to see!"

There was everything but forgiveness.
Posted by dbkundalini at 4:26 PM