Death -- When Your Number's Up 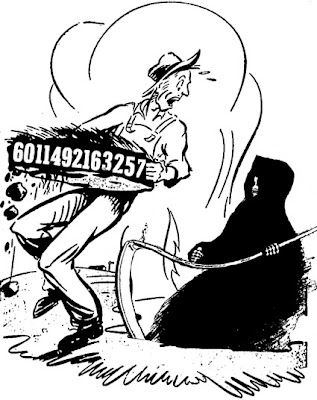 I was walking the halls of a nursing home with my friend, Death. (See below for links). I wasn't 100% sure why we were there. He simply said he had an errand to run. Anyway, we went to the room of a nice older lady, Maudie F-------. He was a gentle soul to her, because her number wasn't yet up.

We were in the foyer, and I called Death's attention to the aviary. I mentioned to him how things have changed in nursing home philosophy, in particular the installing of aquariums and aviaries to give them that added natural dimension. He chuckled, being close to nature himself, and commented how the fish are usually distressed and dying, and, as for the birds, a lot of the deaths he administers these days result from airborne fecal particulates and dander. Then five minutes later, Maudie was dead and Death said, "The birds helped me with another one..."

"So you waited five minutes, then took her?" He answered, "Yep, her number wasn't up."

We got in the car, and I had an idea, since apparently my number wasn't up. The whole thing led me to attempt a series of tests. First, we drove out to the interstate, where I jumped out and started running at random on the road. I believe for all practical purposes I was hit three or four times, without injury. Next, we went over by the depot, where I took a nap on the train tracks; a train came through and somehow missed me.

We then went out in the country where I walked blindfolded on the edge of the tressel, without falling. I climbed up some guy's barn and took off the weathercock and cold cocked myself, but it didn't even hurt. And finally, back home, I literally ate a whole pound of bacon, which inexplicably made me sick. Death stood there, laughing, and saying, "Try your worst, your number isn't up!"

We had a mildly philosophical discussion about numbers and why the mortality of organisms would be on a number system. He explained that it's like everything else. When you set up a system you have to make certain choices, and none of them is perfect. At first he left it to chance, then, because the system has to apply for everything from bacteria to dinosaurs, he didn't want to be overworked.

I argued that he probably didn't need to literally be there for everything to die, although, of course, he gets an obvious satisfaction from his work. Which means he's one of the few ones. Since the only ones I can think of who get satisfaction from their work are prison guards, able to lord it over the rest of their species; artists, because they're able to allow their spirits to soar; and, truck drivers, because of the satisfying anonymity of truck stop sex. Death just grinned.

Then he said, if it'd please me, he would test out a system without numbers. I added, "That would make it more fair, because there are some who take care of themselves, and others who are idiots." He agreed, but said he would need to work out a special dispensation for those under 25, whose idiocy is not completely their own fault. Their brains haven't developed sufficiently to grant them sufficient paranoia to be consumed completely with their own personal safety.

DISCLAIMER: Death said he knows I'm writing up these reports. He told me to warn anyone else who might try dangerous things meant to test him, that no matter what age they are, their number will be up. You will die. Because there are certain unspecified "other factors" in the mix, making the whole scheme of things indecipherable. Any false assurance you may have derived from the contents of this blog post is indeed false, as it is for entertainment purposes only, not for risking your life.

Links:
Death -- I Now Pronounce You Dead
Out Drinking with Death
Death Goes to the Dentist with Me
Posted by dbkundalini at 3:35 PM